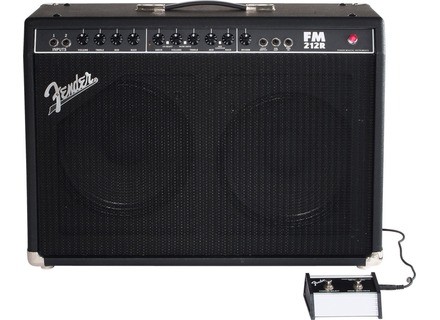 View other reviews for this product:
The Fender Frontman 212 R is a guitar combo amplifier on the low end of the spectrum for Fender amps. In fact, it's one of the cheapest 2 x 12 combo amps that you'll find. This is a solid state amplifier, putting out 100 watts into 4 ohms. It has two 1/4" inputs and other 1/4" connections for a foot switch (which I think is included), and preamp out and power input.

The Fender Frontman 212 R has two channels and includes built in distortion and reverb. The first channel is simple, with only knobs for volume, treble, mid, and bass, while the second channel has the same plus a drive parameter. It also has a channel select button (also controllable with the foot switch), a 'more drive' feature, and a mid contour button as well. Lastly, on the far right there's a reverb knob. I've never seen a manual for the Fender Frontman 212 R.

The sound of the Fender Frontman 212 R is pretty average overall. The clean sound is okay, although very solid state sounding and not warm like tube amp. It will definitely get the job done for practicing and gigging for beginners. However, the distortion on here is pretty much unusable and it's super tinny. The reverb is nice to have but again isn't the best of it's kind. It sounds okay for the price, but will never stand up to most other Fender amplifiers.

The Fender Frontman 212 R is a good amp for those who are just starting to play guitar but want a semi-decent amp without spending too much. I'd still probably recommend going with something smaller if you're just starting out, but if you insist that you need a bigger amp for gigging and still can't pay more than a few hundred bucks, the Frontman 212 R should suit you. If you're looking for an amp built to last, this isn't it, but it is super cheap and worth checking out for those looking for their first 2x12 amp.
Did you find this review helpful?yesno
Cookies help us improve performance, enhance user experience and deliver our services. By using our services, you agree to our use of cookies. Find out more.