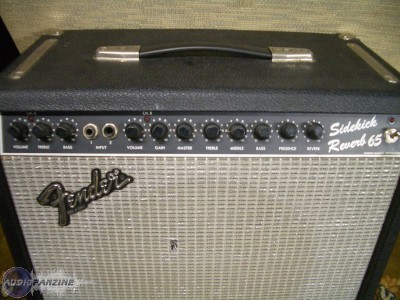 View other reviews for this product:
MGR/Gannesh

I like the fact that this amp has an FX loop, a 2nd channel that mixes the 2 channels it has, and that it has some very nice reverb. 65 watts is what I was looking for and this has it. It has been loud enough for my gigs I've been doing (mostly playin in a big church). Can't say to much here...

The sound!! I don't like the sound! Pro: VERY clear Con: VERY trebly!! Nothing you can do can take away the amount of treble this has. I tried forever to get this to sound good, and it took a long time to get some decent sounds. Only a 2 band EQ on the clean channel, and it has no gain whatsoever...I'm dead serious. You can hardly tell the difference between the clean and "overdrive" channels. I put my metal zone pedal in front of the amp, and it sounded terrible. Through the FX loop it still sounded bad, but better (gotta have the reverb off or it will go on forever...). With my metal zone on, in the many combinations I tried it, it still lacks deffinition.

It was made by Fender, bt doesn't look like it can handle how I (and anyone else) carries it around. All I can say is it BETTER hold up for at least a year or I'm gonna be pretty upset, and by looking at it, it makes me worry.

I don't like this amp, at least for what I wanted to use it for. If you like a lot of clearity and treble, this might be your cup of tea. It does however have enough volume for smallish gigs and can handle a drummer. It's an old amp, so good luck finding it new, but if you find it cheap and used, it's not really a waste of money. But if you are getting one... good luck... you'll need it...