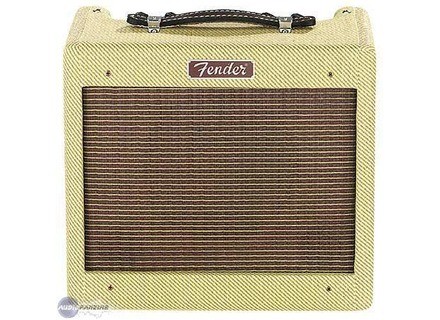 View other reviews for this product:
The Fender Bronco is a small guitar combination amp, not to be confused with the guitar of the same name. This amp is designed for practicing, but is also useful as a recording amp. They were first made in the late 1960's, although I'm not sure what year the one I have used came out. I will say that it isn't the silverfaced version, rather it's the tweed brown one. The amp delivers 12 watts of power and has a small speaker in it, which I believe is 8". It's got a 1/4" input and two 1/4" jacks in the back for sending your sound out.

Using the Fender Bronco amp is pretty simple. If you're familiar with the general make up of guitar amps, you'll definitely feel right at home here because it's pretty basic. It's got two channels, with the first one consisting of parameters for volume and gain, and the second one with parameters for volume, treble, mid, and bass. Needless to say, the first channel will give you some overdrive while the second is clean. No manual should be necessary unless you're an absolute beginner.

The tone of the Fender Bronco is really quite good for a little 12 watt amplifier. I've only used the amp for recording purposes, but for this application this little amp does a big job! It sounds really full on record, almost bigger than it does in person. It's not like you can get too many different sounds out of it, but it's definitely nice to have a little built in overdrive, even if I like the amp best for it's clean tones. It's hard to go wrong with a Fender tweed, even if it's barely off the ground!

I'm not really sure how easy it would be to get your hands on a Fender Bronco, or if they still make them, but this is a really cool little amp. I've never met a tube Fender amp that I didn't enjoy using, so I wasn't expecting anything less from this. It's a great amp for practicing, but is also nice to have around the recording studio. If you can find one of these on cheap and need a little practice or recording amp, definitely scoop the Fender Bronco right up.
Did you find this review helpful?yesno