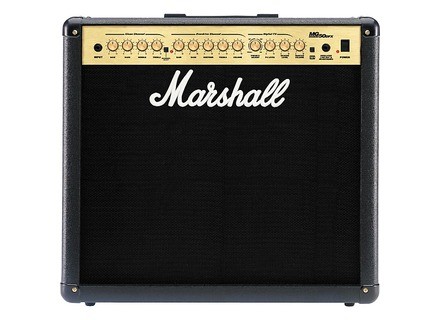 View other reviews for this product:
Kind Amp Combo with Celestion Amp 31cm HP / 100% prampli transistors. it is given to 50 watts.

In front there is between the guitar and Jack for a line out to go on the console and the sound that comes out is not that of prampli but a simulation of the sound that comes out the HP.
Rear facing: Effects loop with exit and enter. From online to connect a CD player to make Jams but I found another use (see below). HP port to connect another speaker that the HP celestion home.

The amp has both channels clean and overdrive with bass and treble rglages on each and SETTING THE contour on overdrive. The selection is done either by a switch on the front panel or by a footswitch that comes with the combo.
on the output there is a multi-effect knob said, actually moving from one chorus of a flange according to the position of knob and more reverb on numrique 2em knob, adjusting the volume and effect level.

It's plug and play, I have not opened the manual is simple and time rgonomique

This is my first guitar amp so no exprience for comparison but overall the sound is very well either in clean or overdrive with overdrive is Rush on a Gibson Les Paul I do not know if it's too normal, since the Humbucker pickups are not buzzer, but good to gain!.
The clean channel offers a sound and I like the overdrive sounds fat as desired. There is a lack of brilliance for sounds like Jazz but Marshall is not good in it instead Jazz rock and does it well.
The multi-effect is simpa who has nothing else but lacks Deffinitions when pushed to use with modration.

I also use a Digitech RP200 and it is the foot. remaining on the clean channel and the following connection: Guitar, pedals, the number of combo sound is stunning, I spend a Hendrix Metallica through Pat Metheny's great. For the pedals with the Overdrive channel has less to seek to have a sound weird forget

The other use of RP200 with the combo is: guitar combo between the RP200 and direct the output and effects loop output RP200 not in effect return but in the line between .
L there is no volume for SETTING THE line between then using the expression pedals Volume on the RP200 is essential and by applying the well is up!
There are superimposed: the sound of the guitar that goes with the normal rglages the combo and a top layer of the 2em worked by the RP200. Y a koi do

I use it for 5 months from the buzz that can come from my guitar cable or a high gain overdrive on channel there is nothing to regret about this purchase and as this is my first purchase I can make great comparison. For the price since it is those five months baisss prs of 20% and for the same price today (October 03) I buy the same in Stereo with 2x31cm (large rage). but on the whole test in the store with a variety of "small" in the same type combo Peavey, Ibanez, etc. .. for the price I am satisfied with trs. After 5 months I still dcouve other sounds with the use of RP200 branch using the wealth of connectivity marshall.
See the source
Did you find this review helpful?yesno
Cookies help us improve performance, enhance user experience and deliver our services. By using our services, you agree to our use of cookies. Find out more.