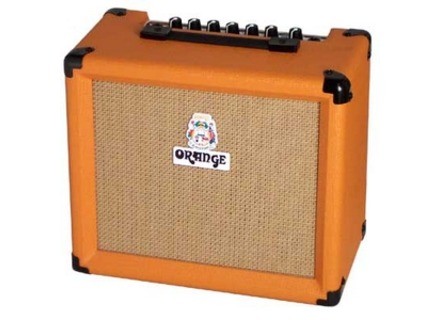 View other reviews for this product:
The Orange Amps Crush 15R is a small and simple guitar amplifier that packs a mean tone for only having having 15 watts. The amp is solid state based and has a single, 8" speaker inside of it. The only connections that it has come in the form of 1/4" jacks for instrument input and a headphone output. The amp also has a real built in spring reverb, which is pretty rare for an amp of this stature...

Using the Orange Amps Crush 15R isn't difficult in the least. It's a great beginner's amp because of this, as it has just the basics. The amp has both a clean and overdrive channel, with overall parameters for high, mid, and low EQ, as well as a reverb konb and master and level parameters for the overdrive. There is also an overall volume knob and a button for engaging the overdrive. I haven't had a look at the manual for this amp...

The Orange Amps Crush 15R really has a big sound for such a small amp. I've mostly used this amp for practicing, but also a little bit for recording as well. It's definitely got the Orange sound, just in a compact casing. I mostly used the clean sound on here, but the built in overdrive is great for getting a bit of gain and especially good for recording close mic'd. I also love the reverb in here, as it's a real spring reverb and it definitely sounds it. I don't think that this is loud enough for shows, however.

The Orange Amps Crush 15R is really the perfect practice amp. It's got more options than you would expect at this size and price. I don't own the amp anymore, but when I did I used it mostly as a portable amp to bring around whenever needed. The price is more than reasonable, as it's definitely one of the cheapest ways to get the Orange sound. If you're thinking about getting this as a practice or extra amp, I'd definitely encourage you to do so as I loved having this amp when I had it!
Did you find this review helpful?yesno
Cookies help us improve performance, enhance user experience and deliver our services. By using our services, you agree to our use of cookies. Find out more.