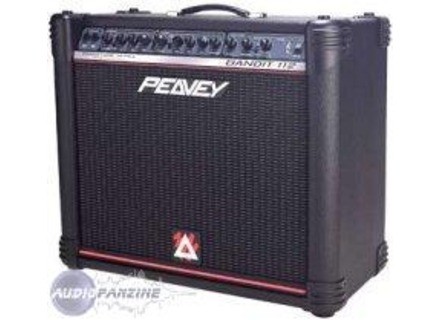 Bandit 112 II (Made in China) (Discontinued), Solid-State Combo Guitar Amp from Peavey in the Bandit series.

The configuration of the beast is very simple, do not bother to look for hours to get a good sound.
I did not have the manual with my amp so I do not know how it is. Any fawn yen is not too much need

Clean sounds really neutral, trs crystalline, single bobinnage has trs sounds good.
Lead in on the other hand is not great. you can not have a good disto well list. The sonnorits are more style overdrive. Finally it's still not bad. If not by adding a little distortion pedals to or playing with a v-amp/pod (by connecting directly between the power amp) makes a good trs.

was a year I use it but I think it dates back to 80 (that's what the salesman told me) and it is still standing. Trsrsistant. I dplace often and I've never had a problem with, has a few knobs that crackles at times but hey it was normal for his age: p.
Frankly if you need an amp not too expensive, take a OCCAZ. With the exprience I think I would take a good tube amp but for now I have no money to
See the source
Did you find this review helpful?yesno
Cookies help us improve performance, enhance user experience and deliver our services. By using our services, you agree to our use of cookies. Find out more.