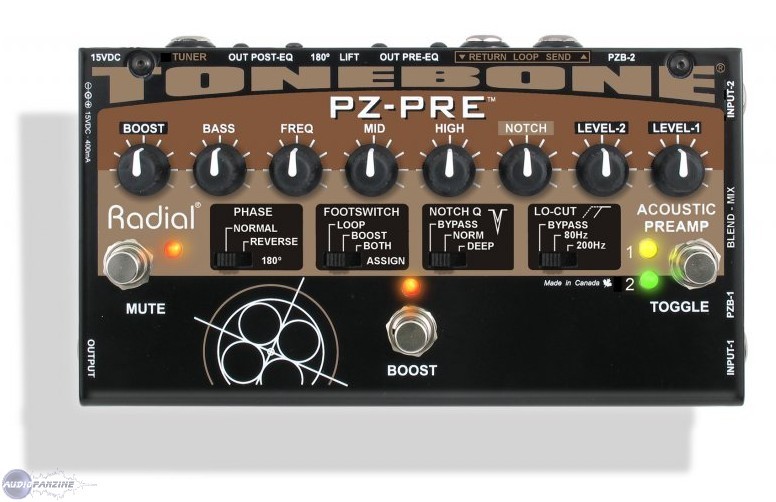 When Radial engineering, who has a reputation for making quality gear, branches out into acoustic instrument pre-amps, the result is the Tonebone PZ PRE, a pedal with two high-impedance inputs, a boost and an EQ. Let's take a look...

The Look and Quality

The PZ Pre comes in the form of an average sized pedal, more or less the same size as a programmable Tech21. It features so many ins/outs and knobs that you have to wonder how Radial managed to fit all that into a frame this size. The latter is made of gauge steel and has a baked enamel finish. The ensemble is rather heavy, even though the power supply is external (an AC adapter). This bodes well for its sturdiness. It’s a good looking product, but of course it’s a question of taste. In any event it looks professional and not toy-like. Also, despite the fact that the upper panel is rather crowded, the writing is clear and readable, even in dim lighting. All in all, it’s a product that you won’t be ashamed of owning and which seems ready to take on years of gig abuse without degrading.

This impression of quality is confirmed when you tweak it. The knobs are sturdy and well made (you don’t have to worry about them moving too easily) without being too difficult for precision adjustment. Even the feel of the knobs (hard plastic) is pleasant. Though they’re a little crowded, you can still adjust one knob without moving the ones next to it. The three footswitches share the same quality; they’re sturdy and sound solid. There’s little chance of breaking them, even in the event that you get carried away and activate the pedal with too much enthusiasm during a gig: they’re solid.

The 3-position switches seem to be slightly less sturdy. But after all, they’ll probably be touched a lot less, since they deal with adjustments that usually aren’t changed too often. They’re embedded just far enough to be protected while at the same time being easily accessible. As far as the ins/outs go, they also seem well made.

The PZ PRE is therefore designed for years of live gigs. Those who use pedals that still work after 30 years of faithful service, like MXR gear, can understand. Nice work; let’s see if the book is as good as its cover…

The connection options are quite extensive. There are, of course, the two jack inputs. For the rest, better have a seat, it’s a long list:

The pre and post outputs are designed to go into a console or mixer, normally main mix for the pre, monitor for the post. The instrument output lets you go into an amp or, why not, a chain of effects that you don’t want to put into the loop. It’s would be difficult to imagine what’s missing, except maybe for a line out for going directly into a sound card. But maybe that would be asking too much.


A Wealth of Features

Let it be stated again: The PZ Pre is a two-input preamp. The first thing you can do is connect two instruments with the possibility of switching form one to the other, or just one instrument that has two outputs that can be blended/mixed. This adjustment is made with a small switch accessible with a pointy object through a small hole on the right side of the device. The two-instrument option lets you use the PZ PRE for a second instrument. The mix option will be very useful for those who have a guitar with an independent piezzo and pickup. One thing to note is that there’s a phase reverse just in case. A second small switch lets you have a special preamp that’s specific for piezzos without integrated preamps. Since I didn’t have such an instrument at hand, I wasn’t able to test this feature.

The input selection is made with a footswitch with two bright leds, one yellow, the other red, letting you see which input is active. Above this switch, there are two volume knobs for each input which allow precision adjustment and mixing of both inputs. It should be mentioned that in spite of the crowding of the knobs and the extra cost of this second volume knob, this solution is better and more precise than a balance knob, especially in a live setting where you can change the volume of one instrument without effecting the other.

There’s also a lo-cut filter which can be activated or switched to 80 or 200 Hz. To this, is added a 3-position notch Q filter (bypass, normal, deep) and a frequency selection knob. These filters, which are active on a narrow frequency, are designed to get rid of feedback. There’s one curious thing: the switch is called « notch Q » but it seems to be designed to adjust the gain of the frequency to be cut, and not its bandwidth. This filter is efficient and apparently lets you cut an unwanted frequency without changing the sound too much.

Since we’re talking about filters, the 3-band EQ should be discussed. There’s a bass and a high with a simple gain adjustment and a semi-parametric mid adjustment (frequency and gain). Even with extreme settings, it doesn’t alter the tone, which keeps its natural sound (as natural as a piezzo can sound). The highs can be pushed quite high without it becoming screechy, while the lows cans give a lot of body to an instrument that’s lacking it (like a dulcimer) without provoking the cotton aspect that often happens when accentuating these frequencies. As for the mids, it really lets you sculpt the sound with precision, maybe a little too much. I almost wish that it worked on a slightly wider bandwidth. But this is really splitting hairs since this EQ is very efficient and musical; definitely one of the numerous strong points of this product.

The last knob (the first one on the left) controls the boost volume. In fact, one of the footswitches lets you activate the boost, the effects loop, or both (set with the dedicated 3-position switch).

The last footswitch is a general mute switch that cuts all outputs except for the tuner. There’s not much to say about it except to say that the output level is sufficient enough to get a good reading from a tuner (whatever the settings may be). Judging from the quality of the rest of the device, it would be surprising if this wasn’t the case, but it might as well be noted, because it’s just the type of weak point that could be really annoying when using it.

We’ve already spoken about the EQ and the notch filter, now let’s see how it sounds. Used with a Takamine, absolutely no hiss nor parasite is heard. It’s to the point where you can say, to the contrary of Tech21, that the PZ Pre could be used in the studio. On the Dulcimer, there was some background noise which was due to the rather poor pickup on the instrument. This pickup has a nasal sound which benefited from the PZ Pre’s efficient EQ which transformed its sound into something decent., even pretty good. Also, the sound of the PZ Pre is at the same time rather neutral while being full and rich. It combines efficiency and musicality. Basically, it sounds really good.

The thing that struck me the most, and maybe the only criticism I have, is the presence of only one equalizer. In fact, it might have been nice to have a different EQ for each input, just to have a real double preamp. Here, the EQ effects both inputs at the same time. But, of course, such an added feature would have jacked up the price and the size of the device, and the pedal is already quite crowded. It should be noted that this small flaw is only annoying if you have to use it with two instruments that each need EQing. In this test, the dulcimer, having no equalizer, sounded pretty bad when dry. Because the Takamine had an equalizer (two-bands), I attempted to first get a decent sound for the dulcimer and then see if the Takamine could manage without having to change the PZ’s EQ. In the case where you need to EQ both instruments you’d need a second EQ. In any case, it is too bad that the integrated EQ can't be bypassed, this would have given even more flexibility.


The PZ Pre isn’t perfect, but it’s not far from it. It offers so much that we can’t help but want more: two Equalizers, a line out… But then it wouldn’t be the same price. Because at $375 list/$299 street, the PZ Pre offers a large palette of possibilities and great sound quality. It’s a choice that warrants serious thought even for those who only play with one instrument; because the PZ Pre deserves the term investment for it quality and its apparent sturdiness which could possibly be a constant companion for years to come.

[-] Only one EQ which is not bypassable
[-] External power supply