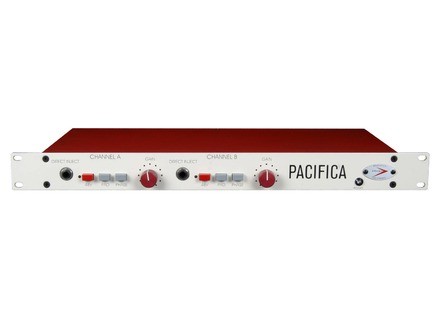 View other reviews for this product:
The A-Designs Pacifica is a two channel microphone preamplifier, modeled after the preamps from a Quad Eight console from the early 1970's. It's a simple device with a great sound. It's got XLR inputs and outputs in the back for each of the two channels and has 1/4" inputs in the front for going direct. It is rackable and only takes up a single space.

It's super easy to use the A-Designs Pacifica. Each channel has a knob for gain control and buttons for 48 volt phantom power, a pad, and phase reverse. The pad is at -20 db. No need for the manual since it's so simple.

The studio of the A-Designs Pacifica is nothing less than outstanding! I've had the pleasure of using some real Quad Eight preamps from an old console and have to say that I think they did a great job of emulating this kind of sound and then some. To me it's got even more depth than the Quad Eights that I've used before and is nice and punchy. It's good for all sorts of applications including on drum overheads, vocals, electric and acoustic guitars, and pretty much anything else when used in the right situation.

A-Designs Pacifica is truly a special set of preamps. Even if you don't know anything about Quad Eight, as most really don't, Pacifica stands on it's own as a set of world class mic preamps for all applications. They're versatile and simply sound great. I'd only used this for the first time recently and it's definitely my new favorite set of preamps. The price is about right for two preamps of this quality, as Pacifica is right around $2000 (US) new, which of course doesn't make it cheap. Still, Pacifica is a beautiful front end piece for any studio, especially in a home environment where you'd want to take your studio to the next level.
Did you find this review helpful?yesno