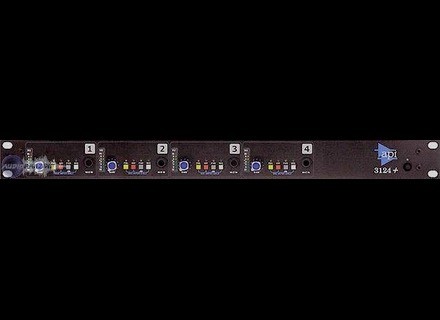 View other reviews for this product:
The API Audio 3124+ is a set of four analog microphone preamplifiers in a single casing. Since the 3124+ that I've used was already rack mounted in the studio where I used it, I don't know what types of connections it has in the back, but since it has 1/4" inputs in the front, it is safe to assume that it most likely has at least XLR connections in the back, although it could have more types as well. The 3124+ will only take up a single space in a traditional rack mount, which is really awesome considering there are four pres here.

The configuration of the API Audio 3124+ is incredibly easy to follow, as these preamps are about as simple to use as they come. Each of the four also has the same exact make up, so once you've learned how to use one of them, you can use them all. Each channel has a knob for setting your gain level, and then a series of buttons that engage phantom power, a -20db pad, polarity, and mic/line selection. I wouldn't think that you would really even need to know anything about mic pres going into using this, but of course it would be very helpful. If in fact you are new to using preamps, I'd recommend doing some research on what each of these parameters will do in any setting, as well as having the manual on hand.

The tone of the preamps on the API Audio 3124+ is pristine. API is known for making top tier mic preamps and other outboard gear, and the reason they are so renown is because of products like the 3124+. They are suitable for use with just about any application that I can think of, as I've always been pleased with the sound that I got no matter what I was recording with them. This isn't to say that some won't find these more useful in some situations over others, it just means that they are versatile. They are overall incredibly clean sounding mic preamps and don't color your sound - they simply spit back to you what you send to them.

The fact that you can get four top quality microphone preamps in a single casing at this price with the API Audio 3124+ is outstanding. While this is definitely designed for professionals, I'd also encourage the home studio owner looking for a set of top end mic preamps to check it out as well, as it will bring your studio to a whole new level. The API Audio 3124+ is seriously one of the best deals out there in terms of a set of four mic preamps at this quality, so do not overlook it if you're in the market for something like this...
Did you find this review helpful?yesno
Cookies help us improve performance, enhance user experience and deliver our services. By using our services, you agree to our use of cookies. Find out more.