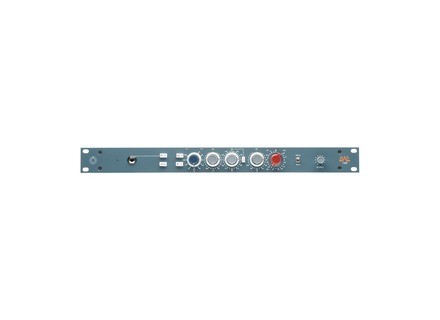 The Brent Averill 1028 is a single channel microphone preamplifier designed for use in professional recording studios. The 1028 has the same preamp as a Neve 1073, with slightly more options as far as equalization goes, borrowing the low pass filter from the Neve 1084. The 1028 has it's own power supply with XLR connections and has a 1/4" jack in the front for going directly in. It is rack mountable and will only take up a single space in traditional casings.

Using the Brent Averill 1028 isn't hard, or least I haven't found it hard to use at all. It has all the features you'd expect with a preamp, with built in phantom power, a phase reverse button, and a four band equalizer. There's also a button for switching it to DI mode, while the EQ has a high band, a low pass filter and two middle bands, with the preamp having knobs for line input and a more fine output knob. You can also set the ohms to either 300 or 1200. I haven't looked at a manual, nor do I think one will be necessary for most.

It's going to be hard to beat the sound of the Brent Averill 1028, as it's a true 1073 module. If you aren't aware, the 1073 (originally by Neve) is pretty much the best microphone preamp ever made, as you might find some that are comparable or have different colors, but it's going to be hard to say that any are better. It's a nice and round sound and isn't the slickest or cleanest in the world if that's the sound you're going for. Personally, I can't get enough of the preamp on here and the EQ is also incredibly, making it easy to dial in the perfect tone.

It would be hard to go wrong with Brent Averill 1028 when it comes to single channel microphone preamps. I love BAE because they have a full line of mostly modern day Neve gear at very reasonable prices considering what you're getting. I'd highly encourage anyone looking for a preamp to add to their high end home or professional studio to check out the 1028!
Did you find this review helpful?yesno
Cookies help us improve performance, enhance user experience and deliver our services. By using our services, you agree to our use of cookies. Find out more.