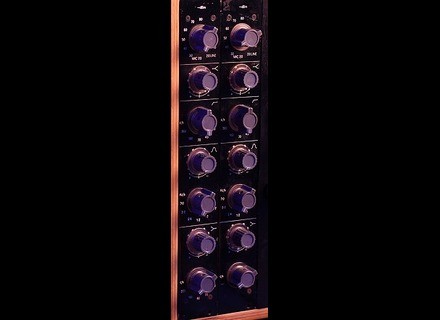 The Neve 1057 is a somewhat obscure channel strip taken from a vintage Neve console. I should say off the bat that I don’t know very much about the 1057 modules, as I’ve only used them on a single recording session where I was an assistant engineer working with an outside engineer who brought in a racked pair of these and a pair of Neve 1084’s as well. Obviously he was making sure that he had as many different sounds as possible for the session, as we’ve got a Neve console of our own at the studio! I don’t know what console these modules are taken from exactly, but it’s got one of the most in depth EQ’s for a Neve module that I’ve seen.

It’s not hard to use the Neve 1057 if you’ve got a little bit of experience using other Neve channel strips of even just semi-parametric equalizers. It’s got more to work with than most of the other Never EQ modules that I’ve used, including the 31102’s and 1073’s that you’ll find in the studio’s Neve 8068. On top is a trim knob as always for setting your level coming in, which is followed by three bands of EQ. The top band is a high frequency band, which is followed by a high pass filter. The middle gives you the most control, with separate parameters for frequency, bandwidth, and gain, while bottom band has the same minus the full Q parameter. It’s definitely not too hard to use, especially if you’re used to the Neve format of EQ’s as I am.

With the Neve 1057, you’re getting a bona fide Neve sound. For me there isn’t anything like that of a Neve preamp and EQ, as in general they’ve got the fullest sound of any channel strips I’ve used before. The 1057 in particular has a sound that falls right in line with most of the other Neve modules that I've used before, the only major difference has to do with the make up of the EQ's more than anything. It just provides you with more options and more flexibility, but as far as sound goes this sounds much like your standard 1073 Neve, although I haven't shot it out with them.

I don't think that you'll find too many people out there who have a bad thing to say about the Neve 1057. This is one of the earliest Neve modules out there from what I was told, although it doesn't seem like too many of them made it very far since the ones I've used were the only ones I've ever even seen. For this reason I think it's safe to assume that these will cost you a good amount of money since they're so rare. I don't think it would be worth it to spend an extreme amount of money on these if you could get other Neve modules cheaper, but they definitely sound as good as any Neve module out there.
Did you find this review helpful?yesno
Cookies help us improve performance, enhance user experience and deliver our services. By using our services, you agree to our use of cookies. Find out more.