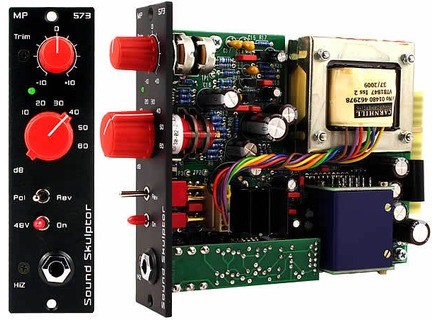 The MP573 is available either as a DIY kit or in completed form, where the fully assembled version is ready to use straight away, and as a kit version which comes with all the components you need to build it.

Based on Neve’s 1073 preamp module, the MP573 is said to have a “full, silky, detailed and musical” sound, and it can provide up to 70dB of gain to mic-level sources. Both the input and output stages employ transformers (Carnhill St Ives models), in a single-ended Class-A design.

The MP573’s input impedance can be switched, via a jumper, between either 300 Ohms or 1200 Ohms, allowing you to match mic and preamp impedances, or simply giving you two distinct tonal flavours. An FET DI input is also present, and this passes through the input transformer, giving you the option to drive the signal and add some saturation to instrument-level signals.

In addition to the gain controls (one stepped in 10dB increments, the other a continuously variable ±10dB pot), two switches on the front panel invert the signal’s polarity, and apply phantom power when it is needed.