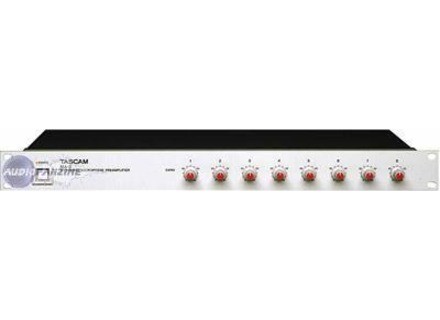 Value For Money : Poor
This is an eightfold pramplificateur micro transistor. No lights. 100% analog, 1U rack. Shallow elsewhere.
There is power in phantme 48 V, but only dbrayable for 8 inputs at once. So be careful with some microphones that it seems do not support such a power.
Point ngatif also supply phantme: button start / stop is small, and over the rear of the rack situ .... L frankly, they could at least have put a command faade.
The connection is very simple 8XLR symtriques in between, 8 output jacks (Verify if the asymtrique symtrique or on the Tascam site). Button big enough for the faade in switching on the device.
Be careful not to saturate your converters, because the buttons are relatively small gains, so as to be prcis is a bit harder (the size of a console knob).

Configuration very simple: to connect its eight XLR microphone, a gain knob, and released in jack. The manual? What ....???? There's no easier ....
9 because of the still switch phantom power supply. Damn would not have had if t onreux when even put a cross in faade ...

Okay so given the price, I am delighted he Yadji 2 325 years ...
Little used I have nothing like this before.
The quality of pramplification is good, but beware: only 50dB of gain, which may be insufficient for some demanding taken. Little coloration of sound.
Trs little breath, but as usual in this price range, if you push back.
The MA8 performs a job trs own, and I get a good quality recording. Obviously, a is not the SSL and Neve pramps other ultra expensive, but for a home studio to have dsireux pramps complte for a battery for example, is a good choice trs . May be a bit "effete" in sound, but frankly I do not have much lments comparison ...
Obviously for a condenser microphone a little seriousness, this is a fair bit pramp even when ...

I use it for about 2 years, but not very often. A report quality excellent price (325's era). It is found again in Germany (Thomann).
I like the simplicity of its effectiveness to own job.
I like much less the scope of the phantom power supply rear of the rack, and only for dbrayable pramps 8. In addition, a attnuateur -10 or-20dB would be welcome t ... Again: he is only 50dB of gain, so if you want to record a pin drop ....
Apart from these inconvnients is a good product.
Octo who wants a cheap and ... IDAL for home studio wanting a good quality for making instruments, and complte with a good sound from mono or Stereo pramp.

Personally, he replaced one day Behringer mixing desk (SERIES blue l. ..) where I was using as before the converters pramps .... Ben is the day and night!
Warning: my view is relativized as some would put srment more ... but there are always better in terms of quality then ....
See the source
Did you find this review helpful?yesno