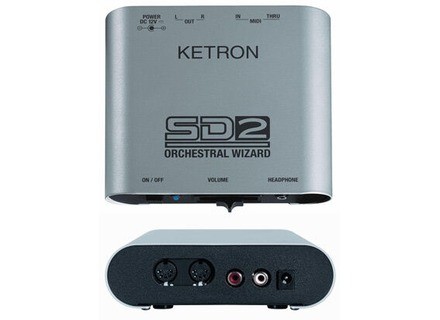 View other reviews for this product:
The Ketron SD2 is a mini sound module, dubbed the 'Orchestral Wizard.' It's a MIDI based box, with two MIDI jacks for input and thru/output. It has a mini jack, 1/8" output for headphones, as well as a volume slider. It also has RCA connection on some of the models. It's a pretty small box and is meant for having MIDI sounds on the go or otherwise. It requires power from a 12 volt power supply and isn't rack mountable as it's a just a small box.

There isn't much to using the Ketron SD2 once it's set up and running. It has software for controlling the sounds with your computer, so make sure that you've got a MIDI to USB interface somehow as this doesn't have a USB jack built in (although I wish it did). A manual might be a good idea if you're feeling lost with the software, but I've found it to be pretty self explanatory so I don't think one is necessary.

The Ketron SD2 has all sorts of different sounds and effects. It's got general MIDI sounds, as well as higher quality sounds of all types that I guess were made by them. It also has DSP based effects like reverb and chorus. The sounds that it has in general are pretty good as they are definitely pretty realistic. It's nice to have the general MIDI sounds, but of course these are pretty dated at this point. The effects are awesome, especially the reverb which is perfect for adding a little bit of depth to any of the sounds. I've probably used the piano sound the most on here, but it also has just about every acoustic instrument you could think of.

As far as portable sound modules go, the Ketron SD2 is one of the best out there. You aren't going to find many that sound this good for this price and in this small of a casing. There is definitely something nice about having a rack mountable sound module for MIDI, but there is a lot that this can offer that a rack unit can't, namely portability and versatility because of this. The price is very reasonable when compared to other MIDI sound modules of this quality, but isn't the cheapest way to get sounds since there is so much out there via software. If you're looking for a mini, portable MIDI sound module, the Ketron SD2 is what I'd recommend without a doubt.
Did you find this review helpful?yesno