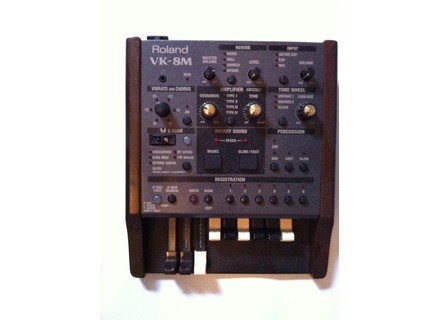 VK-8M, Sound Module from Roland in the VK series.

View other reviews for this product:
Module clone Hammond organ type. Nice presentation metal + wood on the top and sides. Below it is less chic (using plastic)

- The usual commands on a Hammond drawbar (1 set, assignable to each of the keyboards or pedal turns), control vibrato and chorus, percussion, Leslie

- Useful options: - choice of 3 types of wheels harmonics with a more or less vintage
- Amp simulator with four types of amplifier and adjustable overdrive
- Reverb

- The "rolanderies" which would be fine: - the D-BEAM unfortunately that activates as soon as you approach the main control panel to change a sound!
- An input for an external audio I've ever used ...
The connection could have been provided:
- A single entry noon, it's a shame because if you want to play with two keyboards and a pedal you have to use a box MIDI merge
- No speed control at the foot of Leslie: the problem is circumvented because the command is recognized twelve o'clock: just plug a switch on the master keyboard and to assign no MIDI controller corresponding to the speed of Leslie (No. 80). Taking a footswitch directly into the module would have been even better quend
- No 11-pin connector to plug a leslie: shame.

- About noon the implementation could have been better. It has a midi out, but the zippers do not send MIDI messages. We do not monitor the B4 with vk8

In conclusion, all the controls are directly accessible essntiels and that's fine. I would have gladly exchanged the D BEAM and audio inputs for a second switch between noon and Leslie ...

Operation is simple architecture. Everything is in front, one button = one function.

As for editing the parameters of the Leslie rotating type, click the volume, equalizer, it is not very complicated but it is better to have the manual (in English) at hand: no display panel, while is LED!

The manual is comprehensive, clear and simple but is not required to provide a manual in French for a product sold in France?

The sound is the main strength of vk8m. The sound is thick, the simulation of the leakage of the wheels is superb, the amps sound great (especially I and III). The reverb has a vintage sound very well suited. It is a treat, it rumbles beautifully.
The Leslie is surprising at first glance: the setting is frankly wrong and sounds really fake. You must edit the settings to get good sound, but it's worth it!

Vk8m I use the past year.
What I like most: to have an organ in a volume and weight. Having the zippers makes all his interest in playing the organ: the readers of samples hardware or software can never provide this essential element.

Unfortunately I never played on a B3, and I know its sounds by recording groups using it. I got to faithfully reproduce the sounds of the Hammond vk8 and I think in a mix it would be difficult to distinguish between the clone and the original.

I was able to directly compare the vk8 Native B4. While I like the sound of the B4, it is very different from the approaches and vk8m least sounds B3. It also has much less fishing. For me no doubt the roland is well above ...
I also tried the Nord Electro, after discussion with Yvan Lautrec who sold his vk8m for Electro. I was quite disappointed with the keyboard that does not I think of the richness of its vk8. I also found a little annoying because keyclick sounding too "added." Only for Leslie that I preferred the Roland keyboard. Overall, in regard to organ sounds, I find the Roland frankly more convincing.

In conclusion, the vk8m is the best clone B3 I tried to date. It has some flaws but nothing insurmountable. If it again, I would resume a vk8m.
See the source
Did you find this review helpful?yesno
Cookies help us improve performance, enhance user experience and deliver our services. By using our services, you agree to our use of cookies. Find out more.