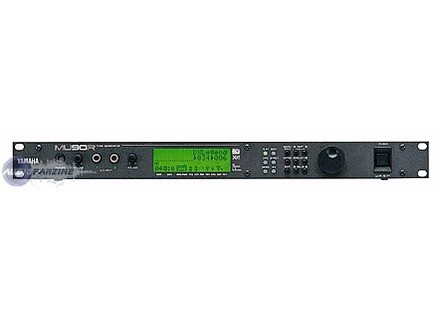 MU90R, Sound Module from Yamaha in the MU series.

View other reviews for this product:
It is a Rack for Mu90R, 600 and some sounds not really ditables (just reverb, chorus, FX).
a squeaker squeaker sounds a bit (it's old)
Then for a line out connections + 2 Stereo outputs (out1, out 2), 2 MIDI inputs, a midi out, a MIDI Through, 1 x phone, and two inputs (mic, line, HiZ, keyb).
Yes you can plug a Guitard and have the effect of MU90, or use it as a module effects.

The manual is valid, and the edition is pretty easy (LCD rtro eclair

The sounds can be a squeaker squeaker, very average, but fortunately the DSP ratrappe all, if the sound effects are blah plutt them are valid.
The electronic sounds are good but then the piano is really bad.

I have 6 years, and I had my first c'tait not have much money, but I have often regretted the price is not great (but c'tait an old model).
j'aurrai had to save more and buy the MU100 is a hundred times better.
I had a DB50XG before and I had passing MU90r DB50XG in a Rack.
See the source
Did you find this review helpful?yesno
Cookies help us improve performance, enhance user experience and deliver our services. By using our services, you agree to our use of cookies. Find out more.