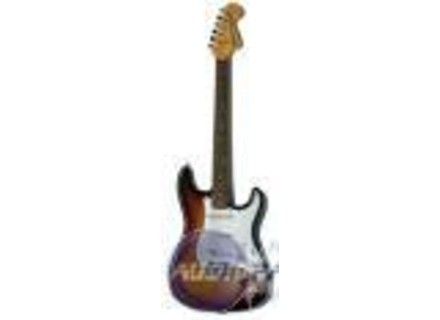 Rosewood trim, a handle surprising comfort to many profiles and jumbo frets for a game you want to sound puissantes.Si sound SRV, Hendrix and Gilmour is the Fender set rve.Un Tex Mex pickups mounted on another strat certainly provide this divinely SRV.Les sound microphones are for many, but the violin finish worthy of a U.S. high-end is well and helps balance the "power "DGIG that this guitar seems to roar even unplugged.Jamais renssenti a body vibrate like the Strato (compared Mex Std / Std USA / Start and plus / ultra on which I jou . On my MODEL 1996, a perfect curvature rglage / action / compensation with ropes at the prs key, it's like an Ibanez (with frets less) as a allows himself to play rapiditconfort without curling, pulling strings with 009-046 del see for bass, it's bonheur.Une highway. (009-042 in the drawing, the impessive gnrales remain the same, it gets really be up at least 046-036 on the low to give its full potential) - long live the 009-046 hybrid! -

Ideal to take the SRV and consors. Microphones fairly quiet questions parasites or default armor, overpowered, TRS in START typs their grain but they become sluts pousss full volume, the sound is distinct, clean and not when crachotte 'you push that little in his last bte retranchements.Elle do not disassemble the highest gain (large metal distortion), but not its registry issue of its grain. The Holy Grail of blues / rock. First contact (though I have seen him stratophile dfile and others), only the TEX MEX given me the impression of power of play is physical, dificil say a few words ... not love at first sight, but better, feel putting your fingers on the "good" guitar. I plug in, turn on the amp, it sounds IMMEDIATE across the board, the feeling of holding a CLNE Number One in the hands.

A good strat among many, hard to say that the TEX MEX are worse or better than others. In Stratocaster, choice and the sounds are so subtle a guitarist a autre.Je say only that it's worth trying to be, and bingo if you pass through the guts as aa t the case for me. Rsolument good strat Boure caractre.Jimmie of Vaughan has not done his war-horse for nothing.
See the source
Did you find this review helpful?yesno
Cookies help us improve performance, enhance user experience and deliver our services. By using our services, you agree to our use of cookies. Find out more.