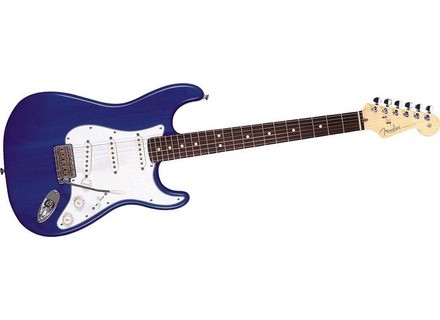 Product replaced by the Fender Highway One Stratocaster [2006-2011].

View other reviews for this product:
In a Fender thoriated United States with an economy in the finish that Fender came out to the dollar level lev (PERIOD rvolue) which made it unaffordable to American Standard in our counters. In thor, because one can doubt their manufacturing intgrale United States. There are small well hidden default sometimes encountered for a long time on the Fender Mexican ....
Despite this question, it remains an excellent mid-range guitar and vintage equipment must contribute a sound strat style anne 50-60.

The neck, frets and keys are in the tradition of Fender and trs enjoyable for those who play apprcient this type of handle. Ergonomics t enough copies to have proven even if it is regrettable that Fender do not return the Ides of good drives, or stratum, for example the heel of the neck n ' square is easy Access in treble. But is that a stratum is a stratum. Microphones allow to find the range of its Fender strats and start to think that the price is a bargain ...

Except that the long one becomes more critical and I started to find that the sound reproduction amliorer silent. So I replaced the mcaniques by Shaller locking, vibrato told by a real vintage modern. Incidentally, two screw vibrato taient visss wrong. But I got better DJ's in addition to the stability of tuning. That left the microphones, screen or change the bte microphones. I have chosen the option of luxury, a plate EMG David Gilmour. Highway and became outstanding but no longer the subject of this notice. Even in passing, two screws on the original fathers had t wrong, tquila abuse? Well, I did not regard the prs plate screws when buying ... (With pulp wood and a good little drill, not too serious but ...) As against the varnish (trs trs fragile mdiator a shot outside of the plate and a hop m sings scratch), where the absence of varnish plutt, seems to contribute a sound reproduction and enjoyable especially compared to American Standard (too much paint-tuft may be sound).

In three years, I had bought ds's available in France, my Highway has many volumes as to not be one more. In hindsight, I might be done better to wait and take a Luxury. But the dollar was too high the era. Or take a Xavier Petit ds dpart in the same price as the base price of the Highway + customization, with a guitar of higher quality in the end ... But I removed a certain pleasure in amliorer.

In conclusion, attention to quality over price that is misleading in this trs MODEL even if we can be satisfied. Examine the seams on any guitar before buying (you even tune in to test and play long mcaniques above). Finally another advantage, you get faster the appearance of the guitar SRV or Rory drisoire a price (except play with trs trs mdiators flexible)
See the source
Did you find this review helpful?yesno
Cookies help us improve performance, enhance user experience and deliver our services. By using our services, you agree to our use of cookies. Find out more.