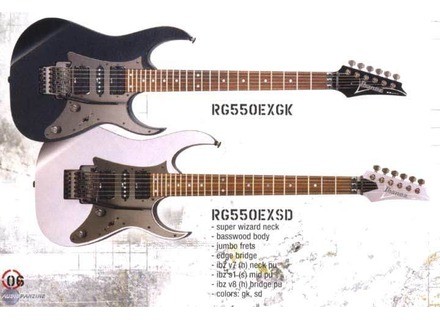 RG550EX, STC-Shaped Guitar from Ibanez in the RG Standard series.

View other reviews for this product:
I bought this guitar just before christmas 2001, about 6 months ago. It cost me about 1400 (US$1300) (i live in Ireland so guitar prices are high). My old guitar was a Yamaha Pacifica 112 and in many ways, the Pacifica was better.

The colour. It's described as "silver sand" in the Ibanez catalogue and this is not traditional paint as usually seen on a guitar. What theyve done is sprayed slightly purpley-silver sand on the guitar and put a "very" light laquer over it. This adds an extra bit of class to an already beautiful guitar. BUT, this proves to be a small problem. My nice new shiny guitar has a habit of chipping. I imagine there must be a magic pixie with a chisel that hides in my guitar case (complimentary of Ibanez with the 550 EX) who likes to add little dents whenever he gets the chance. Replacement paint cant be bought or replicated because every mixture of the "sand" is "unique". Damn!

The neck. For the price I paid, i expected the best, and the best is what I got. The super slim Ibanez Super-Wizard neck is one of the slimest on the plannet. Its easy, fast and long (24 frets)

The action. After I brought it to my local dealer and had it fully set-up (for 65) its almost perfect. The strings lie very close to the frets without buzzing.

I traded in my old cheap Yamaha Pacifica 112 for my nice shiny new Ibanez RG550 EX. I now wish id kept it as a second guitar.

Floating Bridge. The 550 comes with a Floyd Rose, Lo-pro Edge Tremolo system as standard. (this is apparently Ibanez's best system) I first thought this was a good thing. I could push the bar to the body, letting the strings drop completely and pull back a 5th of an octave... not bad u say... This might sound cool but it has some major drawbacks. If you bend a string, the other 5 drop slightly. The more you bend it, the more they drop and sound out of tune. This leads to problems with bending 2 notes at the same time. Its complicated, but once you get to know the guitar, youll understand. All 6 strings are linked to each other at the bridge. This means that when they are in tune with each other, the bridge will float on E. Its not too difficult to tune, but dropping to D is not possible. All 6 strings must be Retuned if this is done (and it wont be exactly D. Hard to understand again)

Ive heard some horror stories about tuning and restringing the floyd rose systems but in reality they're not so bad. The ball at the end of the string must be cut off and then locked in place at the bridge. 1/2 an hour max to change strings and tune which is nothing near the 2 or more hours ive heard of. A nifty neck locking system keeps the strings in tune.

About 2 months after i bought it, it developed a really anoying buzz on the 14th fret, 3rd string mostly. This is one of the most used notes in the E-blues scale. I had to spend some money getting the frets filed. (i dont think this was ibanez's fault.)Also, the bridge was off centre (i've had it fixed) which meant that the guitar was never perfectly in tune with E.

It chips very easily. A pity, because the paint job is very cool.

The three piece neck is nothing less than perfect and stays in tune. Actually, necks are what Ibanez do best.

When I first opened the hard-case for my sister, she gasped. Its a jet black furry lined case made for Ibanez guitars, and the silver beauty sitting snuggly in its groove was shining out. Perfect. To look at, at least.

Its a great guitar, it plays well, but the tremolo is just too frustrating. There are better guitars out there for less.

Later this year im going to buy a Fender Stratocaster, something i should have done in the first place. Nothing beats a fixed bridge.

any Q's, email me at iwasneutered@hotmail.com