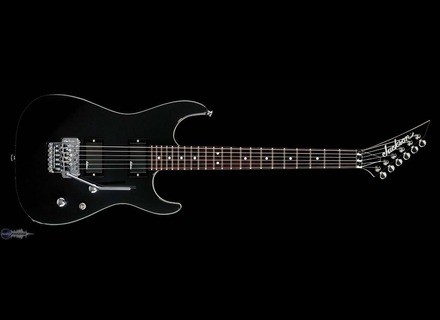 JS30DKT Dinky, STC-Shaped Guitar from Jackson in the JS series.

Value For Money : Excellent
View other reviews for this product:
Jackson JS30 jap
22 frets 2 humbuckers jacksons
Jackson licensed Floyd Rose bridge
3 position micro switch + 1 tone and 1 volume
stick thin enough ideal for quick games
screw the handle down a bit to access the acute but nothing major
block-chord be as little a bit annoying for some stuff but you get used.

The neck is super comfortable despite what I just said screw on the handle and power cord and is easily reached on the last play Cargo
the shape of the handle is very flattened, some do not like, I love ...
the sound is saturated immediately a sound that sounds good and you get to have a "virtually" all sounds saturated k'on want (from hendrix to metallica sepultura through ...) if the branch on a amp properly. against by the clear sound you need a little tweaking but it still manages to have something about right ... c mainly a metal guitar sound so clear .... lol
the weight is negligible compared to a les paul ...

It suits my style of music although I do not really particular style ... lol
In addition, I did not K'un jackson could be as versatile
usually I play in my ptite room of 10m ² with a Peavy rage 158 ... I have neighbors so it was not too much bigger as possible .... lol
jl'ai as mentioned above I come to have a lot of different sounds to sound good dégeut a sharp crystal clear sound a bit saturated, but it is true that the pickups are a bit of definition and I think to replace them future.
I love the distortion sound kan is pushed back it's like a full concert sepultura! lol by crunches are not against the top kan unless they are very light but it's coming perhaps from my amp ...

I use it for 2 months
I love the big sound k'elle lot and also its look with his head thrown signed jackson
I do not like the handle too screwed but good for the price ...
I try bcp other models but the c ki most suited to my wallet ... lol
value for money is very good because we are dealing with a guitar perhaps not as well finished ke the top of the range (-pearl inlay on the fretboard, special varnishes, wood best ....) but it ' is certainly a quality guitar ibanez guitars compared to the same price range ...
certainly I would do this choice because it only cost me € 300 as his new argus is a € 425 that I have also always not understand ... lol
See the source
Did you find this review helpful?yesno
Cookies help us improve performance, enhance user experience and deliver our services. By using our services, you agree to our use of cookies. Find out more.