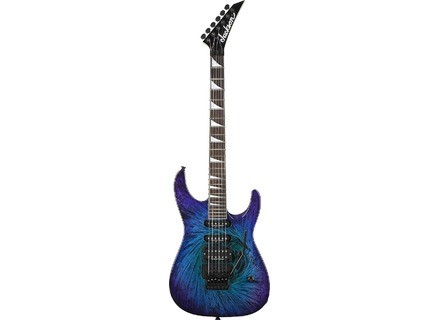 Value For Money : Correct Audience: Anyone
View other reviews for this product:
I got this guitar in 2012 and I still have it. Mine is in trans black. It has the look you could expect for a 80's metal guitar. It could be a metal guitar, but it's more than that.
these are the specs:

My first impression with this guitar was really good, at that time I was looking for a replacement for my older Aria Pro II XR series (HSS configuration strat) I got it used from a web selling site. Nice construction overall, with no flaws, super straight neck, neat in the details. The neck feel fast and comfortable. This model is a cheaper option based on the great SL1 Soloist American model, one of the most remarkable differences is the neck (SL1 has Neck-thru-body) and this one has bolt on. The electronics in this one were a mess and I had to replace all the components for a Dimarzio set. I had to do that because at the beginning it had hum problems.
Also I modded the humbucker adding a push-pull split coil which added a nice couple sounds more.
You can read in the specs it has an alder body, but I feel mine very lightweight, as if it were made of basswood. The top has a flamed maple veneer, nice to the look but it doesn't affect to the sound in my opinion.
Let's move to the sound department. I find this model pleasantly good for clean sounds, as I always say, these kind of superstrats has a "strat-oid" sound similar to strats, but not the same. But that kind of sound has it's own personality. With their own nice twang. All the sounds are usable, and they sound fine.
The sounds for distorted are nice too but I have to say the humbucker is the winner here hands down. As I said before it is all in the quality of Seymour Duncan pups.
While the construction of the guitar is neat and the sound is good, there is a couple of things in what this guitar doesn't go so far. The main one for me is the sustain. This guitar lacks it and I think the main cause is the tremolo system.
Tremolo is Jackson licensed. The good thing in this one is that it stays in tune very well, but at the same time as long as you use it and make pulls, the bar start to feel loose and that doesn't help when you try to do precise bends with the bar.
I can tell that because I've got a Schecter C-1 fr Hellraiser with a Floyd Rose 1000 and that one feels really solid and it has sustain.
PROS: Nice construction - Comfortable neck - Good pups - Stays in tune well - Good balance - Sound has its own personality
CONS: Lacks sustain - Cheap electronics - Tremolo doesn't feel solid
FINAL THOUGHT: Nice guitar overall, great for clean sounds and distorted also. Potentially this could be an awesome guitar, if you spend some extra bucks upgrading the cheaper parts, because the good construction and sounds are already there.