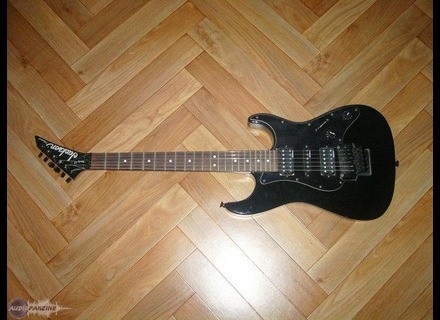 Dinky EX, STC-Shaped Guitar from Jackson in the Professional series.

« EX version of the Japanese Dinky »
3

This is yet another low end Jackson made overseas. The guitar has the following specs:

This guitar was about on par with all other other Dinkys of this era. This one actually had an original floyd rose installed at a later date. It didn't come with it, however, so I listed the Jackson floyd up in the specs. I highly recommend doing this mod if you're going to keep this guitar. Aside from that, the frets were average quality in terms of how much attention was given to them, and the neck joint wasn't as tight as it could have been.

This one had some real Duncans installed in it, so that's what I'll be going by in this review. Even with the real Duncans, this thing didn't seem to resonate quite as nicely as some of the other Japanese Jacksons out there. I think it's because of the poor quality basswood they were using at the time. There are some really good Jacksons out there that are made in Japan, but these basswood ones don't seem to be on par for whatever reason. The Distortion in the bridge was nice, but it was a bit too middy in this guitar. Basswood is a fairly warm with tons of mids, so you have to be careful exactly what you're installing in this. I'm not sure what the single was, but the neck was a Jazz. The Jazz seemed to work out nicely for lead tones.

These guitars seem to respond favorably to a pickup swap. That said, there are better ones out there. If you can get it real cheap on eBay, it's worth checking out. However, I'd rather buy something else, personally.
Did you find this review helpful?yesno
Cookies help us improve performance, enhance user experience and deliver our services. By using our services, you agree to our use of cookies. Find out more.