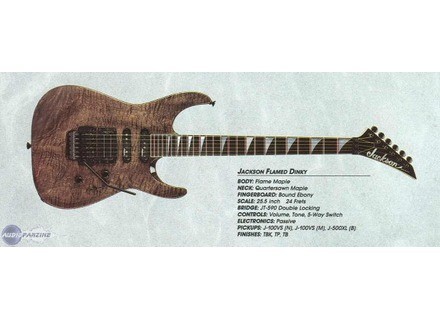 This is one of the other exotic style guitars that Jackson was making around this time. This time, they made a guitar with a 100% flamed maple body. Yes, the entire body is flamed maple. You don't normally see this because figured maple is generally worth quite a bit, and it's very heavy in terms of overall weight. The guitar features a flamed maple body, a bolt-on maple neck with an ebony fretboard, 24 extra jumbo frets with sharkfin inlays, a licensed floyd rose, HSS configuration, one volume, one tone and a five way switch.

The first thing you notice about this guitar is that it has some substantial weight to it. This thing is fairly heavy, and I'm not one for heavy guitars. I have a fairly bad back, and these things don't really jive too well with my past injury. That said, the rest of this guitar is really good. The fretwork was very nice, although there was some wear due to its age. The neck on this felt great. It was pretty thin -- thinner than the SL1. I was able to get some very nice action with it without any issues at all. The floyd on this is pretty good, although I'm still more of a fan of the original floyd rose, and I'd probably swap that trem on this guitar.

The guitar is bright, and it's no real surprise. The first thing I noticed was that this doesn't have the normal Jackson pickups in it, and that's kind of a good thing. The guitar had EMGs swapped into it. Someone put in the EMG 81 in the bridge with two EMG Ss in the neck. The EMG 81 works great for those ultra tight and brutal high gain riffs, but it was just a bit too bright in this guitar, I've found. I would have much preferred the EMG 85 in the bridge of this guitar to help make it thicker and meatier. The Ss were never really my thing as they tend to be fairly bright and lack that warmth and organicness (as organic as an EMG can be, at least) that the SAs have. Still, they deliver some nice clean tones.

The guitar is heavy and bright. On top of that, they're hard to find. To top it all off, some people charge quite a bit. That said, if you can get one at a good price, you need to jump on it because they're killer playing guitars. I generally prefer the koa model, but these are still good guitars as well. Be sure to search various forums and ebay if you're looking for one of these.
Did you find this review helpful?yesno
Cookies help us improve performance, enhance user experience and deliver our services. By using our services, you agree to our use of cookies. Find out more.