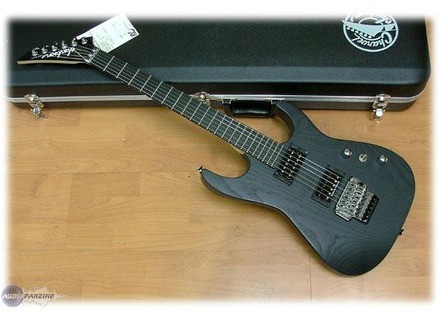 « A bit more aggressive than the normal one »
4

View other reviews for this product:
This is the Swamp Ash version of the somewhat short lived DR2 guitar. The Swamp Ash version is actually the one I prefer, and if you can find it, this is the one I'd recommend you get, but I have something against poplar wood, so... The guitar features a swamp ash body, a maple neck with an ebony fretboard, 22 frets with no inlays, a licensed floyd rose bridge, two humbuckers, one volume, one tone and a three way switch.

The guitar had some pretty good fretwork. They were nicely crowned, and they were shiny as well. The edges were beveled properly so you don't cut your hand every time you move up and down the neck. One thing worth noting was that the fretboard itself was rolled a bit, and I have a feeling someone else did that as I've never seen that from Jackson before. It made the guitar pretty comfortable in my hands. However, the bridge on this isn't that great. It has one of those Jackson licensed bridges, and it just doesn't sound or feel nearly as good as a true original floyd rose bridge does. I think the metal used on this is cheaper, too.

The guitar had a DiMarzio Tone Zone in the bridge and a Breed Neck in the neck. The Tone Zone is a very hot pickup. It has lots of bass and midrange. Swamp ash itself tends to have lots of bass and high end. It made the guitar sound very big, but it also filled in the gap in midrange that you tend to hear from swamp ash guitars, so it was a pretty cool combination. The Breed Neck is one of my favorite DiMarzio neck pickups. It's a super fat pickup, but it's not so fat that you lose all the cut like certain other fat neck pickups out there. It's kind of like if you were to combine an Air Norton and a PAF Pro into one pickup. This is the pickup you'd get when you cross the two. Awesome for leads and great for cleans too.

The guitar is very good, but we still have the issue of the shoddy floyd rose that's installed on this. The licensed ones just aren't really my cup of tea. There are only a few licensed ones out there that are any good (Schaller, Gotoh and a few Ibanez ones). The rest of them are pretty much flaky and have issues. The rest of the guitar was cool, albeit slightly heavy thanks to the swamp ash body.
Did you find this review helpful?yesno
Cookies help us improve performance, enhance user experience and deliver our services. By using our services, you agree to our use of cookies. Find out more.