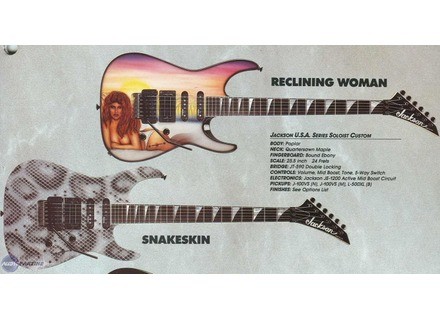 This is a custom model of the famous Jackson Soloist. These are ones you can custom order from their own custom shop, and they're absolutely killer guitars. The guitar features an alder body, a maple neck-thru design with an ebony fretboard, 24 extra jumbo frets, sharkfin inlays, an original floyd rose, HSS configuration, one volume, one tone and a five way switch.

The guitar had a pretty sick finish on it. It was a custom graphic that the previous owner had spec'd out. It had a really cool destruction/fire kind of scene going on, and it was surely a metal guitar. The guitar has an original floyd rose, and that happens to be one of my favorite bridges ever made. They're extremely solid bridges, and they tend to last forever. The upper fret access on Soloists is amazing, so no issues there. The binding was great, and the fretwork was top notch. All in all, the guitar was great, including the weight itself. Sometimes, these can get a bit heavy, but this is just perfect.

The guitar had EMGs installed in it. The bridge had an EMG 81 and the neck/middle had EMG SAs. The EMG 81 is awesome for heavy metal. It's super compressed, but it's also super tight sounding. It's clear under high gain, and it cuts through like crazy. It can sometimes be a bit bright, but that brightness helps it cut through the densest metal mix. For any other genre, it's kind of lacking as it's a bit sterile sounding at times and probably a bit too compressed. The EMG SAs can do pretty much any genre, however. They're very fat sounding single coils, and they work equally well with cleans as they do with leads. They're great pickups, although sometimes I find myself struggling a tad as there's a little bit of a lack of output on these compared to the EMG 81.

The guitar is top notch, and I really liked the custom graphic that was on this guitar. The HSS configuration gives it some awesome versatility, although the EMGs installed in this particular model probably took away that versatility and put it more in the realm of rock/metal than being able to do any genre. Anybody who buys a guitar like this will be easily satisfied, and I recommend everyone check these out.
Did you find this review helpful?yesno
Cookies help us improve performance, enhance user experience and deliver our services. By using our services, you agree to our use of cookies. Find out more.