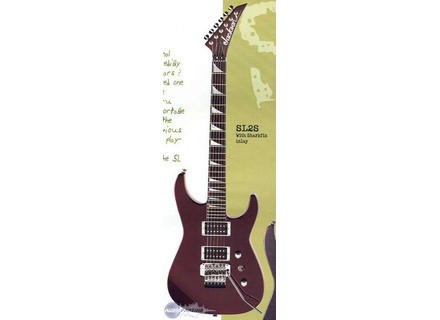 Soloist SL2S, STC-Shaped Guitar from Jackson in the USA series.

This is one of the Select Series models that Jackson used to release. These aren't quite as good as the ones you see today, but they're still fairly solid guitars. The main difference seems to be in attention to detail and overall hardware, but the tone is still there, for the most part. The guitar features an alder body with a neck-thru maple neck, an ebony fretboard with 24 extra jumbo frets and sharkfin inlays, a licensed floyd rose, two humbuckers, one volume, one tone and a three way switch.

The guitar's fretwork is pretty good on this model. There were no real obvious issues when it came to the overall crowning or ends of the frets. They weren't as good as some of the other models I've seen, but it's not too bad. The one thing that really gripes me about this model is the licensed bridge that this model comes with. It's not my favorite, honestly. I much prefer the original floyd rose that so many other Jacksons come with today. It just feel better to me, although some might disagree, and I do understand that the quality on the original floyds has gone downhill within the past few years. Regardless, I'd rather have one of those than the bridge that's on this.

The guitar had a Duncan Distortion calibrated set installed in this guitar. The Duncan Distortion in the bridge worked out pretty nice in this. It was a touch bright at times, but it worked great for those tight riffs and pinch harmonics. They really seemed to leap off the fretboard with these. It's tight enough to do death metal, and it can even do some blues/fusion tones, but it's not quite as organic as a JB would be, and a lot of that has to do with the ceramic magnet in these. The Distortion neck was a bit too powerful and overwhelming for me. It could deliver a fairly cool tone, but I prefer the 59 in the neck as it's thicker and tends to be a bit more organic overall.

The guitars aren't the best that Jackson has ever made, but they're still fairly solid and worth checking out. The bridges on these aren't the best, and the fretwork isn't quite on par with what you see on other Jacksons out there, but it's nothing that'll distract most people from buying these. You can generally find really good deals on these on eBay, so be sure to grab one if you find it going for a god price.
Did you find this review helpful?yesno
Cookies help us improve performance, enhance user experience and deliver our services. By using our services, you agree to our use of cookies. Find out more.