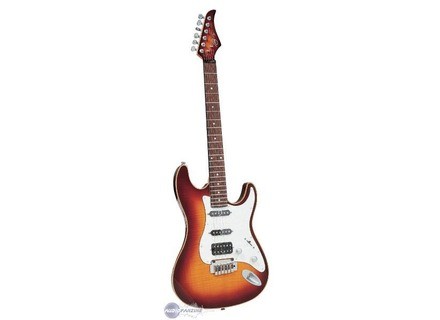 MG 200, STC-Shaped Guitar from Lâg in the Out of Bédarieux Collection series.

Rather versatile guitar with a neck slightly U very nice and comfortable. The woods are very beautiful and remarkable finish (beautiful natural binding !!!). Everything is perfectly balanced and weighs very resonant. Access to acute obviously very wealthy. Unplugged sound very rich and slamming, somewhat like that of the Tele (in spirit anyway).
Major weakness in hardware and micro level. For me the vibrato (Wilkinson) is virtually condemned (wooden stud beneath the vibrato movements to avoid too frequent) and mechanical lifts bartered for French models. The agreement is now correct. The original pickups (the Lag Chinese-made) are on mine in the closet, replaced by a Seymour Duncan TB4 bridge in (humbucker) and a Seymour Duncan STR-1 (TeleRythm 54 ') to handle.
An instrument generally enjoyable to play.
8 out of 10 once the agreement problems solved.

This is a guitar that wants to cause very versatile. Humbucker in neck + two singles, a priori happening everywhere. No specific carractère (presumably again!) Except the shiny and very very slamming that goes the other stratabound dinstiguer. Not wanting to stop there, I changed the pickups to operate the acoustics (the wood) very special and close to that of the Tele and the dirty side beautifully she could leave parraitre when pushed in its limits. Result: a nice little beast a hybrid, very comfortable in saturated crunch as the double splitable (bridge) and slamming and always a little dirty on the handle (Tele 54 '). The bass are not necessarily very active (less than a Tele), but acute so terrible screaming and accurate. Presence of large and medium-medium high, which makes it even better.
I use a Vox AC30 on PODxt modeling, gain high enough, then almost never clear, however, she seems very comfortable in the registry clean (I think for a lot of rhythmic jazzy or funky). I do not dwell on since it is not my area. She did, in my opinion, not necessarily high-performance metals for the most violent, but is that really what you ask??
At least in alternative rock records, or Anglo-Saxon sounds, she is at home! she's beautiful, rebellious and wicked. Everything I love. This is my second guitar, the main one being a Gibson SG standard, and it proudly holds his rank.

This is my second guitar, the main one being a Gibson SG standard, and it proudly holds his rank, fully complementary without being opposed. I regret the microphones and the original hardware but once the small problems resolved, everything is fine. Beautiful sounds worthy of the greatest: when purchasing, I had gone to buy a Start, it would error I committed. I will be missed this little bomb. It is far from being among the cheapest in Asia (€ 700) but it is part of the best finished. Again the woods and varnishes are very beautiful, she is very comfortable and so original (flamed maple top and very beautiful pearl pickguard way). Mine is tobacco burnst and is part of the old collection Lag Out of Bédarieux, replaced by series Electran almost identical. The next "Teleïde" is operated by Lag in series with Bédarieux Morgane Standard 1000, of course much more expensive (€ 1290)!
I like his character, his look and price.
I do not regret my purchase in any way changed the pickups now. It responds perfectly to what I asked (alternative rock).
I advise all those who want a simple coil, versatile, fun and character, provided again the customize, which will make you indispensable.
You will like it !!!!!
See the source
Did you find this review helpful?yesno
Cookies help us improve performance, enhance user experience and deliver our services. By using our services, you agree to our use of cookies. Find out more.