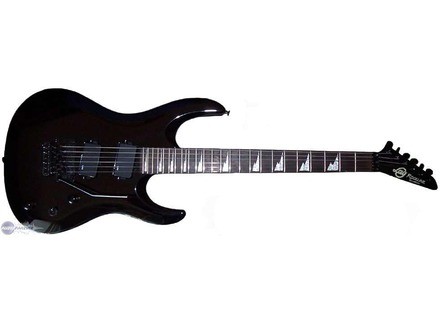 Rockline SpeedMaster, STC-Shaped Guitar from Lâg in the Rockline series.

Value For Money : Excellent
View other reviews for this product:
This is one of the guitars produced dernires toulouse if I am not mistaken, and unfortunately that does not have an SERIES reu particulire attention, so with some default of nothing but Luthra serious.
It has a handle stocky, a rosewood fingerboard and alder body.
It is mounted with two humbuckers lag tilted 10 degrees SETTING THE volume, tonal and slcteur 3 postions.
Bolt has a 24 frets back teeth with pearl requinen mcaniques oil bath and a licensed floyd pink floyd lag.

The handle is impeccable, super smooth, super fast, easy to play and quite boring but ergonomic rgler if it is not stabilized (The same applies to the floyd). Access in acute trs ais not for little hands because of a heel trs pais. This is a guitar heavy but well plutt balance. We easily obtain good sound that the pickups are not great (I suggest you change them for Di Marzio evolution with whom she feels great). It turns to a guitar and even the death mtal, many low-and mdiums mdiums, round bass with a nice grain but unfortunately not enough treble. It is also good for the trs blues rock much aggressive.
The key is almost flat and the strings much space for a quick game. I did put that 6 of the default Luthra.

It sounds perfect for prcis death, a good foundation in the bass (with Di Marzio evo tt qd c'tait of the same but even if the origin), but the highs are Slight and trs Submitted mdiums and once she is aggressive and has the attack. It is still quite versatile styles but for blues, rock, country etc ...
It is plugged into a marshall super mg100dfx rotten in acute and prcis not, but she rveil well. It is a Grat 'works well in engl and Peavy. She misses the little 10 for its acute sturdy enough for solis sick.

I possde for just over two and a half years and I am satisfied with TRS, the lag guitars are really awful, my next one will, Bond ... I love the sound and the mouth of the mine, it has a good 875 euros qualitprix the era and today there is ak 200 tt is equivalent to 599 euros. I tried to free BECP before and APRS it but it's still the one I prfre even finish leaving DSIR. It's a good guitar for non-dubtants, but there is still consider it corrected the handle (and it MRIT) into a real box of combat.
See the source
Did you find this review helpful?yesno
Cookies help us improve performance, enhance user experience and deliver our services. By using our services, you agree to our use of cookies. Find out more.