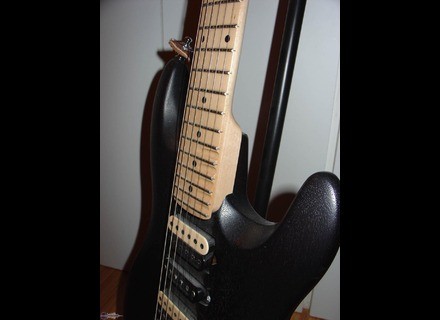 The Beast Custom, STC-Shaped Guitar from Lâg in the The Beast series.

Value For Money : Excellent
View other reviews for this product:
I have 10 years made a Beast at the time at Toulouse where Lag time was not yet Bédarieux. The neck is maple (key ditto) and the latest scaloppées boxes are on the three upper strings, which makes the bends there. This round is very flat and facilitates the quick game. Obviously, the maple fingerboard gives a clear sound in his slamming, but saturated, micro rattrappent easily this characteristic of the maple.
The microphone configuration is 2 doubles and a single. In severe pafpro a Dimarzio in the middle, a Vandt Zandt in a Dimarzio Tone Zone acute. All managed by a switch 5 pos. and a split bass and treble pickups. No Contol tone, but a volume knob quite gradual so as not to lose momentum when it is down.
Shaller FloydRose licensed vibrato. Ropes and mechanical blocks in oil bath.

The neck is very fast as I said. You can play all over and it goes. One small problem remains to side tapping my opinion the prerogative of the sleeves ebony or rosewood. Access to acute is very easy and the last scaloppées boxes can even do not suffer too much in bends vibrated on extreme highs. The only requirement is not to tie the string too large (floyd forces). So exit the followers of Hendrix and Stevie Ray Vaughan. but these have already chosen a strato ...
The guitar is light (basswood for the body) and very ergonomic. The range of sound is very broad. Clean sounds, out of phase, crunch, saturated and super saturated. A guitar-all-trades.

For me playing everything. Country, blues, rock, hard rock, fusion, jazz, a guitar is extremely versatile and is revealed to use the must. Switching between cocaine at a Clapton Staiway to heaven (Led Zeppelin) through a Smoke on the Water (Deep Purple) via a Hotel California (Eagles) or Sultans of Swing (Dire Straits), that could be better that scratches that can do everything in terms of sound. Well, the guitarist is not bad either, but my lag, no need for multiple guitars.
My stuff is pretty simple although effective: I attack the Lag in a preamp with a Marshall JMP1 Quadraverb Alesis GT insert for reverb, chorus, flanger, delay .... and I plug it all on my little Yamaha sound. The output has JMP1 speaker emulator (and also Quadraverb ...). Backing tracks on CD in the console and go for it cushy shows what you can do! Lag does not move and does everything I ask.

10 years of use and it still bathes.
Extreme versatility for those who do not want to be limited to one style of music.
I have a stratovolcano at home, but she can not do everything as my Beast.
The price is excellent value for 8600F ten years ago. Today, the models have changed a bit, but I trust that the quality is still there.
If I had to buy it without a problem, although I have a Les Paul, a Gretsch, Rickenbacker one, an ES335, ... and many others. But I still do not separate myself from my Lag The Beast
See the source
Did you find this review helpful?yesno