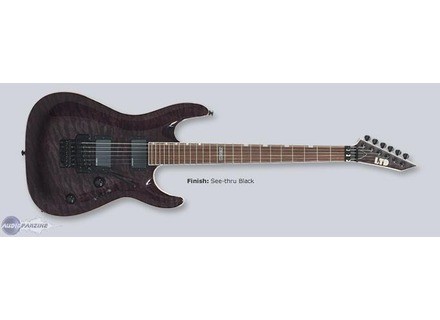 MH-250, STC-Shaped Guitar from LTD in the Standard MH series.

Value For Money : Excellent
View other reviews for this product:
See manufacturer ...
As against mediocre origins settings, the floyd is set too high, ditto for the mikes, sleeve too tight, a lot of Loose tricks if you have a good dealer, a full tower is a must for the silly sounds like it should ... As all sellers are awesome, my remark has no place tell me ...
Second on the other hand, they are real pigs these Indonesians because when we look closely there are plenty of small bending defects has cut the sickle, paint transitions slobbering limit, etc ...
However if we do not stick your head above it is superb anyway for perfection is at least 1000 Euros in addition, I had the ESP KH2 so I can compare, in addition to this one has more jaws view that the KH is commonplace.
Floyd holding up well, there's a little play in the vibrato rod, but it does, no detunes nuisance after dive bomb, yet I'm excited ...
I put 7 for sagouinés finishes.

The handle is hell, behind soft, quick access to the front with a really acute nickel (thank you the driver handle).
Level anything ergonomics mean, I would go so far as to say she is sexy (it's the first word that came to me ...) front as behind is round while staying aggressive ...
For sound, I was surprised, I did not think she would be as versatile for distos slap (not many medium on the bridge, I was rectified and the amp is a killer) for clear and well it also slams version humbucker is not great but once split is simply beautiful (I have a Fender and I'm a boring side its clear) especially the middle and neck position.
Top too, is that even the mikes were splitted bite and character distortion, it was still a surprise.
You can send the sauce widely (I make 'Tallica, via AC / DC who spins to Malmsteen to be on ACCEPT, and it does) after distos for extreme Death Metal style, I know and I' have not tested, can not be specific enough?
The right sound? Live in my Modefour Marshall crunch channel donf gain, EQ has 5 everywhere scoop Inrush and it is part, as said above, for more big distortion necessary to add med for my taste ... and it's gone.
Such a good sound with the original mikes I put 8 because usually I change mikes on my guitars, not.

For sound, I have already touched on the subject, I do not see what's I could not get it, if I want a Fender I take my Fender, and those of the beast are all more qu'utilisable.
Personally I play on Marshall, Mesa, Line 6 pedals with boss effects Korg Rocktron and line 6 again, we put the jack in it and that's it.
Mike side config perfect (I would have never thought that ESP original mikes) when a sound is not suitable splitt and that's it, I play with EMG 81/60/85 di Marzio Chopper and Dp and 59 of sh4 duncan jazz, I really do not think those sin by the toothless or personality.
I put 9, after the tastes and colors ...
I would try to make a mp3 demo on my space or audiofannzine, for those who do not.

I have ESP (KH2) Ibanez (several models) Fender Aerodyne, LTD ec 1000 30 anniversary custom, Bc Rich Kerry King Signature US jackson (Warrior, RR and kelly) a share for sloppy finishing it does not pale in .dropoff window
I wanted a guitar with floyd, splittable pickups has less 500E (I paid 499 with free cover) is the only really good I have tried the other had all the tps fault either mikes will suit me not the corny was ugly ... At first I found this convenais me.
Unforgivable on finishes, knobs and other settings problems, it's still 500 Euros, it is a substantial sum, which should result in a higher quality delivery.
Once properly set it is a true beast of competition, 'try before you buy other models designed with mikes and other infklam512 without personality.
500 Euros for great value for money, I do not regret, I bought it for rehearsals history of not lugging my big models, well, it will also make the scene, I really like it goes from roots modern like me ...
See the source
Did you find this review helpful?yesno
Cookies help us improve performance, enhance user experience and deliver our services. By using our services, you agree to our use of cookies. Find out more.