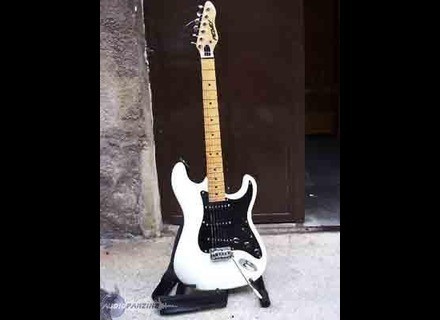 Predator USA, STC-Shaped Guitar from Peavey in the Predator series.

View other reviews for this product:
Aaah - my first guitar! I bought this instrument way back in 1991 when I was an exchange student in the US. I really didn't know much about guitars back then and chose it for its classic look and solid feel. They are built very well and the neck feels nice and smooth. My model was black and had a white pickguard - but besides that it is what you see in the picture. I think I paid around $500 at the time...maybe less.
It did not come with a gig bag or any other accessories - so I was carrying it around just like this for a while...hey - I didn't know!

As I said the neck was probably the best part of this guitar. It is a maple neck without additional fretboard and gave the guitar a nice twang. Getting a good sound was at times a little more difficult as the electronics really weren't very good. The volume knob cut off the high frequencies very quickly and the tone knobs really didn't do a whole lot.
On the other hand it nicely stayed in tune and the intonation was always quite good.

At the time I didn't really have a 'stlye of music'. Looking back I probably would have been more happy with a Gibson Style guitar (these days I would go with a Godin entry level) but that is what I bought next anyway. I used it mainly with an old beat up Peavey amp - the name eludes me right now. It was solidstate though and you had to get the distortion by actually overloading the preamp - no switch or anything like that.
I liked the neck pickup the most. The other two were often very bright and had no punch in the mids - this happens a lot with similar guitars in this price range.
I think this guitar is great for getting started but once you want to play with a drummer and need to cut through without blowing out your ears this becomes obsolete.

As I said - this guitar was great to get started. After I bought my Gibson Nighthawk (s. my other User Reviews) this guitar was barely used anymore - even though the sound is of rather different character. It is built very well and these days you get equivalent models from China, Taiwan, Korea or Mexico for a lot less (even Raptor exists as such a model). If your budget to get started is below $500 (with amp) then this is one of the better choices. Make sure your guitar store does a setup on the guitar though (ask for it before you buy it)! Often they get sold out of the box and quite often they play like dirt...this is not a Peavey problem but more an issue of such mass production.
Did you find this review helpful?yesno