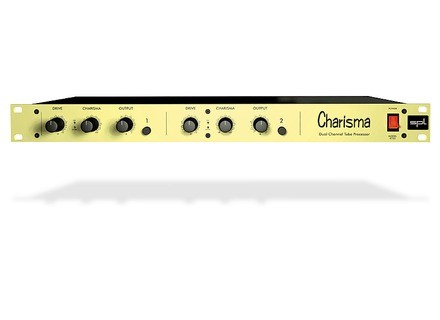 « The lamps combined with the digital »
4

View other reviews for this product:
This is a dynamic two-channel processor, analog technology to lamps.
Level of connectivity, each channel has an input and output (XLR or 1/4 "). Power" universal "practice!
This is a 19 "/ 1U. The ignition switch is located on the front.
I noted 9/10 because although the price is high compared to the versatility, it still fills its only function perfectly. And those who are interested in this device may already have an idea about its use.

Setup is simple, by a detailed manual (English and German) very clear and illustrated with examples.
There are three knobs, two diodes and a push button by:
- The push button used to activate / bypass route. (Note that although the Charisma is off, a bypassed path passes the signal)
- The DRIVE control adjusts the input level of sound that attacks the lamps, it is primarily he who dose the amount of effect, the limiter threshold is fixed.
- The potentiometer CHARISMA is of course the originality of the device. I&#39;d say it&#39;s similar to a compressor on Knee: hard position (fully clockwise), the sound is not altered as it has not reached the threshold. Position soft (left), the saturation of the lamps is heard gradually while the input level approaches the threshold.
- PROCESS The diode indicates that the Charisma acts on the input signal. It shines more or less depending on the saturation amount provided by the lamps.
- The LED MAX Full PROCESS LED, it lights when the maximum effect is reached.
- The OUTPUT sets the output level.
Overall it&#39;s very intuitive and it goes to the core. A small detail is boring, however the lack of link: you have to copy the same setting on both channels for use in stereo when you have a specific idea in mind it may interfere as it is for example impossible to play keyboard and set the machine at the same time.

The only effect of Charisma is high quality, it adds a kind of grain to the sound, which can be determined from subtle to more violent.
I used it on quite a few sources. What we immediately notice is its distortion well "set", not too crunchy and warm. I believe this is the kind of effect that, well balanced, does not sound vulgar but rather adds to the holding and presence.
Usage requirements range is variable and subject to experimentation. Personally I think it will not fit on anything. For what I could try:
- I use it all the time on the Virus TI. What a trip to hear HyperSaw énormifiée by Charisma. Of the sub-bass type square I find equally formidable to add harmonics after filtering. Anecdote, recently on a piece electro bypassed and I thought I recorded a sort of pad "sine" acute, while my game intensified sound almost began to cry, oh so trippy experience.
This allows me to bounce on the fact that the synth really seems to be its field of excellence (including FX). on the other hand it does not define its own identity of sound. For those wondering if they can "warm up" of VSTi, I would say a bad sound will not sound better in Charisma. After all depends on the VSTi on the NI Massive or the Arturia Prophet / MiniMoog I can already imagine wreak havoc. I have not tested on analog synths, but it should be done soon (go to the classifieds).
- The perceived: I love the look on kicks of hip-hop and rock, where you can put the knob back to Charisma. It saves them a potato, and pushing the saturation can give them an almost dangerous side. Sometimes I use it in small doses on overheads, to increase the aspect of "stress relief" of the song. Ditto for the hi-hats and claps, it&#39;s cracked slightly, if you like the feeling that the song "rubs", he tries at all costs to slip between the concrete block walls are too narrow, we can put a everywhere on the drums.
- The voice: he has already been helpful to retake the lead voice in the Charisma in the mix, especially on the choruses. I have been riding on the metal and the result is radical, literally the voice pierces the mix for you to come scream in the face. You can also make it look cute, slightly broken, on a softer voice, or give gloss and the presence and definition to a rap voice.
- The guitar really where I have not hooked, already at the base it is not useful on a guitar distortion, but even on its clear that shambles, it is less pleasant to listen.
This is also the limit of the device in my opinion: instruments that sound "natural" kind of wind instruments, strings, piano and typically have a record that I found quite unpleasant - dirty, but not dirty as it should.
In fact, without wanting to establish a general rule, I feel that the instruments that take up much space, with lots of harmonics, are those who do not have the Charisma (otherwise resemble sounds with exceeded 0dB). Nevertheless, I would say we can still balance this kind of sounds by filtering them up before processing.
- Finally: the mix. I agree with previous opinions: pass the master track in Charisma really gives a good effect, it can significantly support the mood of the song. Pushed to the extreme it might look like the kind of effect you hear in such Kalkbrenner (I think Sky & Sand or Queer Fellow), but he may have used a Culture Vulture, for that matter!

I use it extensively for four months, on almost anything out of the Virus TI synth plugin and UltraAnalog; also on masters to add punch and cohesion to the whole (as it is a limiter before a saturator ). I sometimes specifically, according to the needs of the piece, to put it on the drums (especially kick) and voices (choruses).
In terms of musical style I use a lot of electro, hip-hop often, and occasionally on rock. I would not see this machine on the classical, folk and the music more "acoustic" in general.

Advantages:
+ The big addition it provides for good electronic sounds (like synth percussion), now I create my sounds with Charisma lit
+ The directness of the machine: three knobs.
+ The parameter charisma: despite its air of quiet is almost alone rests the consistency of sound between the input and output (much more than the knee of a compressor for it), he decides whether only peaks detonate or all of the sound is bathed in a carpet of saturation
+ ON / OFF switch on the front

Disadvantages:
- No link between the stereo channels, damage when you set the Charisma while strumming
- It must have already created a great sound for it to be enhanced by the Charisma, in this sense we finally see the device as a synth module, just like a filter or an LFO. And it is an expensive module.

I conclude by saying that I still use it all the time, right from the creation of sound (synth or drums), the waveforms "basic" being very flattered by the Charisma, it gives me quite directly confidence in its draft for the drive to the end, I do not know if this sentence is clear. Let&#39;s say the Charisma has become an essential part of my music as well as the filter on a synthesizer or a reverb could be.
If I had to make the choice, I used rachèterais. Nine in all cases I would not take the 2 Charisma: I would wait to buy the 8 Charisma, much more advantageous price level (8 channels for € 1700), and suddenly much more flexible.