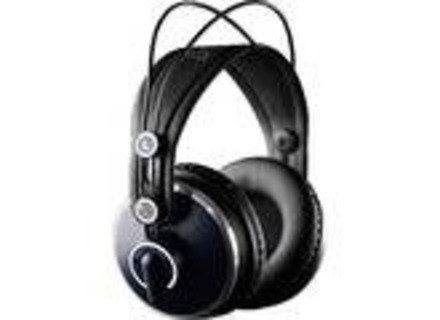 Buy this productView price information >
View other reviews for this product:
I use it now for 2 months. What I like the most, its design, its trslger weight, comfort (very good!) Reasonable price. I have a Sony MDR-7506 for many years, and I was looking for a second headphone complment to the monitoring / mixing in a semi-professional studio environment. I chose the AKG after very many readings of tests and comparisons.

I'll start with the positives: the sound is very clear prcis, flat, neutral properly (Not looking Hifi headphones here). The bass is a little low that's it. It is a closed headphone and very well off the sound outside. You your quiet

The AKG reproduces very well the left-right space. It's a bit droutant compared to elsewhere MDR-7506 is more "compact" in stro I think. This is true as told another opinion here that the sound is comparable to the MDR-7506, but I find it more "ramass (plus it later). Having spent a lot of time on the MDR I think that it will take me qq months adaptation, especially since I do not use that half the time (shared with MDR).

Now flaws: It's one that exaspre me, and frankly I'm almost ready to sell it so takes my head (in the literal sense): the headphone cable is directly connected to the hull. However, it is completely hermtique (normal is a closed headphone. In fact, when the cable tappe the table, or chair, or lorqu'on touches the same cable means noise multiplied by 10,000 in the ears. It's just unbearable. The MDR has no default. Obviously, when we sound in the headphones means more noise, but listening not stop either! So you have to get to the cable away from any physical interfrence. Not easy.

Then the volume: it is ridiculously low. It takes a pr-amp. But it's not a priority purchase in a small studio. The outgoing volume of my card (Audio Kontrol 1) is more than enough dfoncer my ears on the MDR-7506. Nothing of the sort with AKG. This is unfortunate because we feel the potential of the headphone, I not profit. So if you also use it to espriez DJ mixer, forget completely (well it is not the goal).

Finally, very few seem low compared to prsentes MDR. That may be a big default MDR, but I was even pregnant and a hi-fi quality on which I can test my productions, and I feel the difference. Mdiums also seem a little weak compar MDR.

Voil a rather long review, but I use my headphones so (several hours a day - so that the speakers are rarely kindlest) that I thought was important to share here.

In conclusion: it is a very good headphones, the sound is very faithful, but lacks power and does not seem realistic in the bass. With a pre-amp and a shot of EQ (post-master) it should be perfect. Remains the default of hyper-nervant cable, you see. Compared the MDR-7506 seems more suited to monitoring, even if the latter almost too low too prsentes and compared the stro broadcast is poorer.

My ct I'll see if I'll keep, at least a third complter the headphone, this time from the ultra-top level, a Sennheiser HD-650. But that's another price. Besides, if you do not have too many means, a tip: Save and invest a max in a very very good headphone. You will not regret it, and lasts for years.

EDIT: I accuracy of all I'm doing electronic music (tech, electro, a little hip-hop, dubstep). If a help to understand me.
See the source
Did you find this review helpful?yesno
Cookies help us improve performance, enhance user experience and deliver our services. By using our services, you agree to our use of cookies. Find out more.