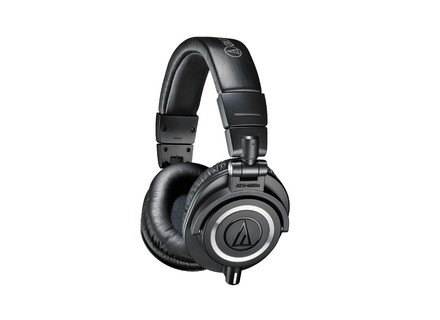 ATH-M50x, Studio headphone from Audio-Technica in the ATH-M series.

Buy this productView price information >
View other reviews for this product:
Used for 2 weeks, no disappointment so far, quite the contrary!

To summarize, this is a headset with which you feel comfortable immediately and whose kinks are fully forgiven when you look at the money we spent.

Generally, I use the large checker headphones for my mixes. One, it is so pleasant that I listen to music just for fun.

Unlike most of its competitors who use mostly in velvet, the atria are leatherette. It's nice but it's perhaps sweat when it's hot.
Comfort level, no complaints. This site naturally. It is not used too much and not too loose.

I mostly listened to metal with at the moment.

Qualitative impression. He looks strong. It comes with 3 detachable cables. A very good point. Competition should be inspired.

Purchased from B & H Photo Video in New York. The headphone radius is very impressive. There are 4 sub-departments: DJ, mid-priced, trendy stuff (like Beats or other distressing marketing scam) and audiophile.

In the mid-priced range, I was rather go for a Shure SRH-940. He told me much but I preferred the Audiotechnica, almost two times cheaper. In fact, I preferred it to everything that was in the radius. There was also a significant difference with his little brother ATH-M50, more painful in the upper midrange.
In the audiophile radius, there is nothing affordable so the comparison stops there. In addition, the music played varies from one section to the other, which prevents them compete with the reference numbers in the market.

With its pokey impedance, the volume is high. For the subway with a smartphone, it does quiet!
No need to turn the sound way down to watch a movie on the plane.

In terms of tonal balance, it is less easy to be objective. I can only compare it to my other headphones (Beyerdynamic T70p, Sennheiser HD565 Ovation, Sony MDR-7506, AKG K 272HD).
In terms of bass, it is closer to Sony, ie they are present - especially as others are quite dry at this level. I venture to say that there may be a bump of 3 or 4 dB below 100 Hz
The midbass and midrange seem rights.
The upper midrange is nice. Clearly, there surely has a dip in the curve. It is very far from 7506 and T70 are very analytical.
Acute does not shock. It should be fairly neutral.

In terms of spatial, I expected worse. At this price, you can not ask a tonal linearity or spatialization top flight. Yet it is very honest, especially for a closed headphone.
A note in passing that there is no effect "carton" like in the AKG. For cons, the T70 is a good notch above on this point.
See the source
Did you find this review helpful?yesno
Cookies help us improve performance, enhance user experience and deliver our services. By using our services, you agree to our use of cookies. Find out more.