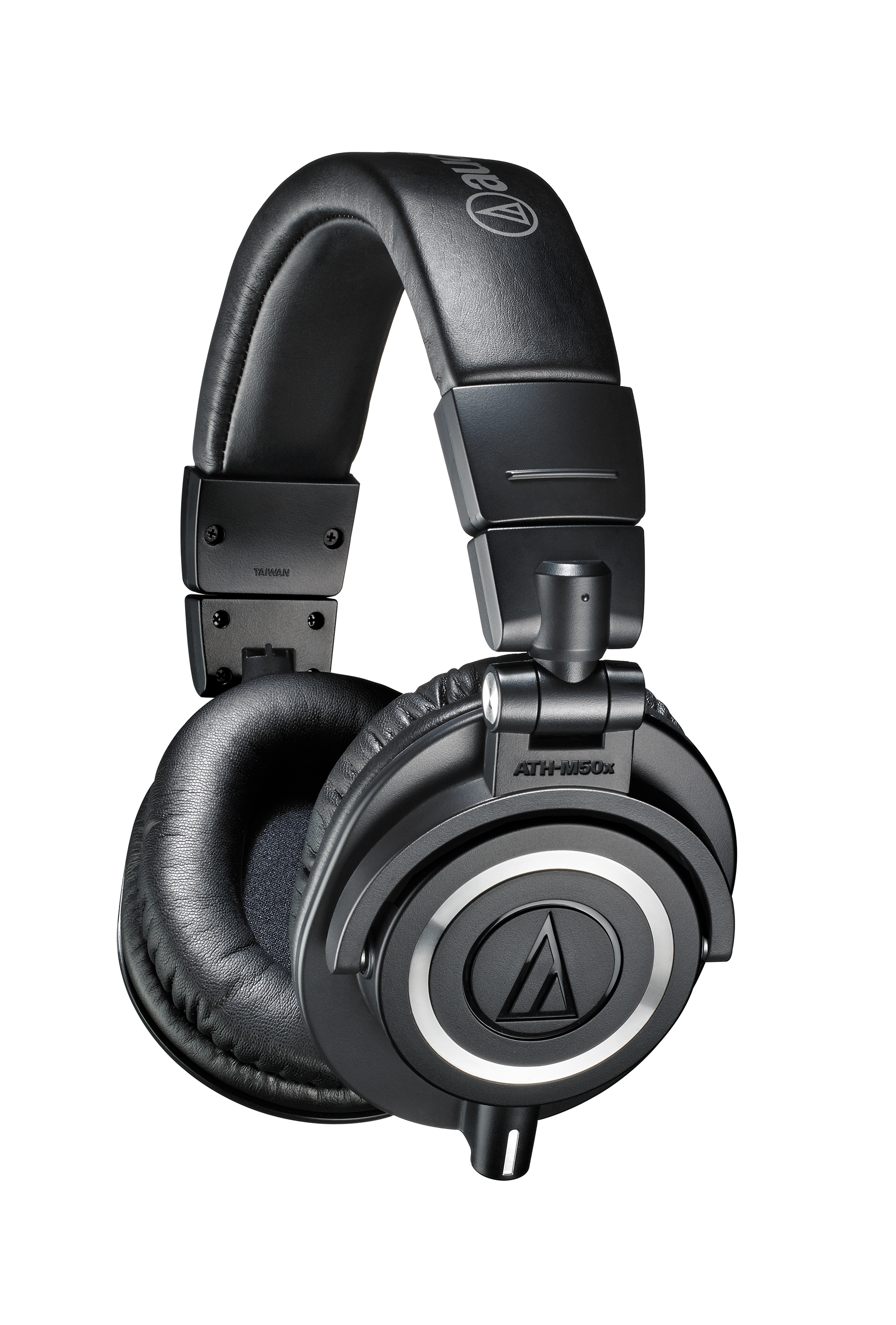 Studio headphone from Audio-Technica belonging to the ATH-M series

« Too fun for precise studio work, but perfect for enjoying music »

This review will mostly focus on M50x’s qualities from a studio professional point of view – what to expect when using these headphones as a monitoring device for mixing and do they really cut it for mastering work.

After all, you should make your decisions based on what’s in the material, otherwise you might end up with mixes that translate well on your gear and not much else. Know the limitations of your equipment and you will be able to work around them. This text will attempt to illuminate, what to keep in mind when using the M50x for critical studio work.

The original ATH M50 has been one of the most recommended closed headphones at the $150 price point. Most of its fame comes from the consumer segment. One of its largest communities – this forum – has generated dozens of reviews praising its qualities and excellent price/performance ratio. Currently there is a distinct lack of dedicated pro-audio headphone reviewers, therefore most of M50’s pro-fame has largely spilled over from the consumer audio segment. At the same time both M50 and M50x have an abundance of qualities useful for both music listeners as well as producers.


Perceived Acoustic Power Frequency Response (PAPFR) graph. Measured at Sonarworks lab with a proprietary compensation curve. Not to be compared directly to AFR measurements from other sources.

These headphones perform just like they measure – a fun, clean sound. This is mostly due to M50x’s U-shaped FR and extremely low THD. Looks like ATH has really put in some serious R&D work in M50x’s driver, because THD this low at sub bass frequencies has usually been reserved only to planar headphones. Kudos to ATH for bringing clean bass to the masses!


Now onto the sonic issues to keep in mind if one wants to use these headphones successfully for music production. All of the M50x headphones we measured exhibited level differences between channels. At 200Hz-600Hz there is a wide dip which drops to around -5dB, whilst not too annoying to consumers, it can cause trouble to LCR mixing advocates. With the M50x, some string instruments like guitars for example will change tonality, depending on how they’re panned. The effect will be subtle, but must be taken into account to prevent chasing ghosts in the mix.

On the top end of the U curve we have a peak at 5.5kHz-10kHz which goes up to +7dB at 10kHz which can cause a number of issues. First of all, too much de-essing will be applied to the vocals, as the peak resides right at the sibilant range. Secondly, your sweeps won’t be as accurate because the FR peak will give you a false sense of rising. In general, this peaking can cause your mixes to be dull – one of the inherent cons of all “exciting” headphones, if used in studio.

The low-end response on these headphones is positively thunderous – there is no sub-bass roll-off until 20Hz and THD stays extremely low. The channel imbalance which starts at about 350Hz is still present, but on lower frequencies it shouldn’t be much of a nuisance. Most of the signal at these frequencies is mono anyway and humans don’t really excel at positioning low frequency sound.


After we meticulously measured every dip and peak found in the M50x, our engineer generated a calibration profile. These profiles are available for every Sonarworks Reference 3 plug-in user. They turned these headphones into a serious instrument even fit for mastering. This paragraph will explain what can be gained by applying digital calibration to these already great headphones.

We can bet that when you turn on the Sonarworks Reference 3 plug-in, you’ll wonder who flicked the fun switch off! Resist the urge to take the headphones off and listen to some well- mastered tracks. Your ears will need some time to readjust to the reference sound signature and your first impression will surely be dull for lack of a better word. At the same time, it will allow your mixes to translate well to speakers and just about any headphone out there.

As always there will be some loss of output when applying calibration. In this case it should be about 8dB, which isn’t too bad due to the fact that these headphones are very sensitive. Most audio interfaces will be able to drive these headphones at ear-splitting levels even with calibration enabled. For some higher gain devices, the loss of sensitivity might turn out to be a blessing in disguise, as it will give more usable volume pot range.

Just like its predecessor, the M50x has a great fit that doesn’t get in the way of everyday use. Unlike most on-ear headphones, this one doesn’t rely on a strong clamp to achieve a good seal, therefore it is fairly comfy even in longer sessions. One thing to note, however, is that all pleather pads are prone to becoming sweaty in hotter environments.

Construction wise the M50x is decent, but isn’t the tank that is the venerable HD25-II is. Like almost every other headphone out there, most of the outer construction is plastic, however it feels like it’s the kind of plastic that breaks rather than bends on stress. Both earcups are on hinges which allow them to be folded up for a more compact package. At the same time, every moving part does present more points for wear, tear, and ultimately – failure.

This time Audio Technica has given the M50x a swappable cable and generously included three additional cords. The standard package includes a coiled 1.2 – 3m cable, 3m straight cable and 1.2m portable cable. All three of them feature 1/8’’ TRS jacks and the two longer ones have a thread for 1/4’’ jacks. On the headphone end, M50x have a 2.5mm TRS connector which seems to be proprietary due to a locking groove. All in all, kudos to Audio Technica for choosing to go this route because with most headphones, cables seem to be the first to prematurely fail.

Most studios tend to stick with their headphones until they disintegrate due to natural or unnatural causes and very few give attention to earpad wear. We recommend swapping out pads as soon as they start changing their initial geometry. Old pads seal worse and let the drivers sit closer to one’s ears, thus changing the initial FR. Fortunately the pads on the M50x are swappable as well, so the user is able to maintain their headphones at peak performance for a longer time.

In terms of noise sealing, the M50x works well, but again is overshadowed by Sennheiser’s HD25-II and many in-ear monitors. The seal should be good enough for mixing in moderately noisy environments and will guard musician’s ears from excessive SPL’s, but most of the time noise will obstruct the finer details. The seal will also keep the user from disturbing others working in close vicinity, good for mixing on the road.

Has ATH hit a homerun again? Could be so – at least for consumers! At the studio professional end, things are a tad more complicated. No doubt, it’s a great headphone with relatively little shortcomings, but the tuning might be too “fun” to be considered reference grade. At the same time M50x’s competition doesn’t fare any better, most of the other closed studio headphones at this price range are starting to show their age. Sennheiser HD25-II scores some hits in the ergonomics department, but its drivers are a bit long in the tooth. Same goes for Sony MDR-7506. Now, Beyerdynamic DT770 is a worthy competitor to M50x sound wise, but the Japanese headphone is able to land some hits with its three detachable cables and superior portability. Everyone at the lab agreed that these headphones calibrate very well and after calibration pose a serious threat to newer higher end closed studio phones like Focal Spirit Pro and maybe even ATH M70x.

In the end, this is a modern headphone meant for modern music. Engineers who work with a lot of bass heavy material will be in for a treat as the M50x offers excellent performance in this regard. They might not mind its other shortcomings, but should keep them in mind. Or they can use calibrated headphones and focus entirely on their work. Sonarworks calibration turns the M50x into one of the best closed headphones at any price.
00