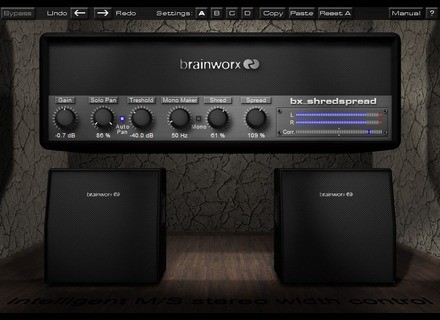 Brainworx has announced the release of bx_shredspread, a new M/S stereo width and tone control plug-in for Windows and Mac OS X in VST, AU and RTAS effect plug-in formats.

bx_shredspread is a stereo processor to be used on any stereo guitar subgroup or stereo guitar channels. Its main purpose is to make sure your stereo ("doubled") guitar signals sound "wide and phatt".

Stereo-guitars that have been created by recording several mono tracks (aka "doubled" guitars) will benefit best from the auto-correcting features and the "SHRED-filter", but bx_shredspread will work on conventional stereo guitar sounds and stereo samples as well, the company says.

Although mainly created for guitars bx_shredspread may also be used on keyboard groups, organs, choirs, etc. according to Brainworx.

bx_shredspread is a tool to control panning, stereo width and the "tone" of your stereo guitar tracks / groups. It is designed to avoid typical phase problems that can occur when using M/S technology via algorithms for stereo width, EQ and pan.