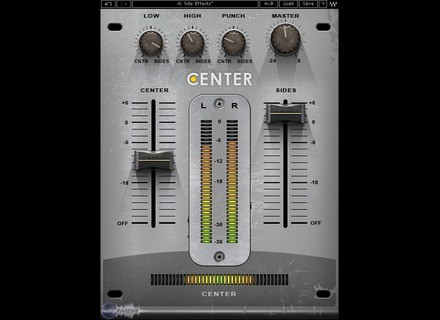 Buy this productView price information >
View other reviews for this product:
Center plugins are mainly used for trying to achieve a proper balance between phase and a bunch of other things like that. An improperly set "center" can cause stuff to sound very low in the mix and sound like it's being pushed back or something. It's kind of hard to explain without getting very technical. Waves has this plugin to help try to restore that center without damaging the actual wave form. It's a very simple plugin to use, and it doesn't have too many features. You have your center slider, the sides slider and four knobs that control lows, highs, punch and master. Simply enable this on whatever you want to use it on (usually your master buss) and start adjusting. It's simple enough to where you don't need to read the manual, although I doubt you'd be disappointed as Waves' manuals are pretty solid.

I've used this a few times before to help bring up vocals in a mix before. I was getting some bizarre phase issues for whatever reason, and I think it was due to the way I was miking them. I'm not entirely sure. Regardless, this helped fix the vocal issue I was having, and I didn't have to re-take the track again. It's a cool plugin, but I don't find myself using it all that often. Solid, but somewhat limited for my application.
Did you find this review helpful?yesno