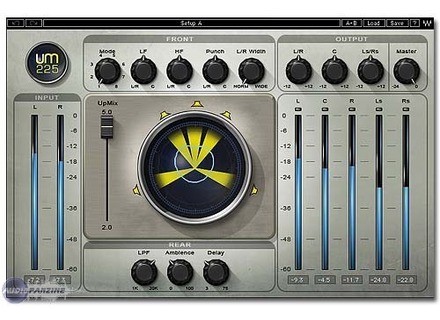 Buy this productView price information >
When mixing movies today, the biggest thing that people seem to be paying attention to, besides the overall remaster of the video, is the sound. Converting stereo to surround sound can be quite a challenge, and it doesn't always work that well. Waves tries to help you with the UM225 and UM226 plugins. The UM225 is the 5.0 version of this, where as the UM226 is the 5.1 version. Both are great, but I don't see the real need for the 225 version considering the 226 version is that much more versatile, and most sound systems today are a minimum of 5.1. Explaining all the controls in here would take awhile, but it's mainly just knobs and sliders per channel. To use this, simply enable it on whatever you want to convert from stereo to surround sound. The master buss is where this usually goes. I've never read the manual, so I can't comment as to how well it written, but Waves is usually pretty good regarding that stuff.

The main difference between the UM225 and UM226 is that the UM226 has one extra channel for the sub. Why they made these into two different plugins, I'm not entirely sure. Everything I can do on 225 I can do on 226. It's a solid plugin, there's no doubt about that. I just find that if I'm going to do this kind of work, I reach for 226 almost all of the time.
Did you find this review helpful?yesno
Cookies help us improve performance, enhance user experience and deliver our services. By using our services, you agree to our use of cookies. Find out more.