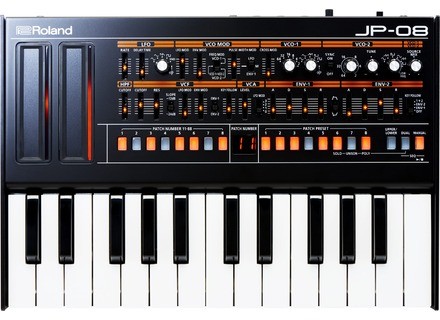 Value For Money : Correct Audience: Anyone
So this is a miniature analog-modelling synth rendering Toland’s high-end synth from the early 80s (1981 precisely), the Jupiter 8.

It seems sturdy and is quite heavy considering its size, which is quite telling as to its building quality. After a closer look, it IS indeed a high-quality product, all the more when you consider its price!

It only comes with 4 batteries, the micro-USB cord is not supplied (but it’s the same standard as the one powering your cell phone).

It’s very cute but very small too – hence some of the nicknames people have given it, the “gnome synth” or “hobbit synth”.
After the Korg Volca, Arturia mini/micro-brute, Korg mini MS20/ARP Odyssey and Yamaha Reface, Roland seems to have followed that “honey, I’ve shrunk the synth” trend which has been going on for the last few years now.

I love compact machines, but this one is a bit on the extreme side: try and edit with faders that are only 2cm long… Thankfully, they offer a good resistance which allows to compensate the problem while adding precision.

Roland’s technology used here is called ACB (for Analog Circuit Behavior), it models the behaviour of each of the original synth’s component for better rendering of the analog sound.

It is a further improvement compared with the previous generation Virtual Analog models: this time, it sounds (almost) like a real analog’s oscillators, envelopes or filters!

It may still sound a bit too clean, but only a bit…

As to comparing with the original, I’ve owned a Jupiter 8 in the past (which I had bought used when it was still affordable), but it was 20 years ago or so. In theory, I could compare it with what my ears remember, but it’s frankly too old for anything reliable. However, all in all, I’d say it sounds rather close.

So far, with the synth’s processor, you’ll have to choose from polyphony or realism, and Roland has favored sound quality over polyphony which is limited to 4 voices. Hey, why only 4 voices? That’s much too limited for a digital device, even just 6 would have worked for me but 4… Granted, you can buy another JP-08 and chain it to the first one for a total 8 voices, but it instantly becomes less practical and more expensive – plus the psychological effect: buying twice the same gear, doesn’t that feel strange?

Especially as we can expect further evolutions:
Roland has indicated the Boutique series would be a limited edition, which doesn’t mean another (better) series won’t be produced, e.g. bigger models with more polyphony.

So, with the original 4 voices, wave your pads goodbye… (unless perhaps you can do with only two notes, but that’s quite limites). This won’t be a problem with most other sounds without too long a release – well, as long as you’re not into very complex chords.

Of all three Boutique synths, the JP-08 is the only one that I’ve bought as it’s also the only one featuring VCOs, the one with the most powerful synthesis engine, plus the only one with such an “80s legend” status. The only things missing compared with the other two (the JX-03 and JU-06) are a good chorus and longer-coursed faders/knobs.

I also bought the optional clipsable keyboard (a great idea by Roland), which is nice though nothing exceptional: the advantage is that you can play instantly with nothing else to plug and it also looks clearly nicer, but you’re soon limited with only two octaves.

Please note that the JP-08 also can also be used as a rather powerful sound interface (though I haven’t used it as such), features a rather basic step sequencer, and has an integrated small speaker of very average quality (don’t count on it for more than quick sound tests).

- The faders’ course is too small.
- Polyphony offers only 4 voices, which is the JU-08’s big fault: a real pity, which by itself prevents me from giving it a 4-star rating.

But clearly, it sounds very well and its power allows to create a wide array of analog sounds: so wile it’s small in size, this JP-08 delivers a mighty, mighty sound!

As a bonus : a track (and album!) entirely recreated using the Jp-08 :