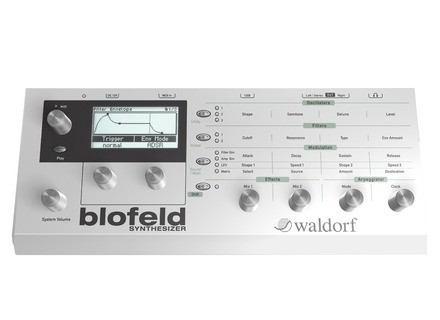 Buy this productView price information >
View other reviews for this product:
(Originally written by nth206/translated from Audiofanzine FR)

Some important details:
- 1 Midi In port, Midi Out managed via USB port - Audio output on TRS jack
- 16 multi-timbral parts but no Midi Off selection (see below for part muting)
- About 1000 sounds of all sorts organized in 8 banks (if I recall correctly)
- 2 menu knobs and 4 controls

Very easy to use for those who already know Waldorf synths like MicroQ, etc. On the contrary, newbies will need some time to get use to it.

Lots of editing possibilities, it's a Waldorf!!! Even if the menus and sub-menus seem tedious, it's not really a problem, except for live applications. Since all parameters are editable via Midi, you'll quickly get used to automating everything to get the best out of the unit.

The user's manual is clear, period.

No surprise for those who already know Waldorf.

For everybody else, it's a digital synth with a particular sound character. This synth sounds rather loud compared to other digital instruments I already tested (even the famous E-mu range). The factory presets are good. We're talking about real synthetic sounds (forget the trumpets!!). I believe the unit is conceived for hard house, hard trance, progressive or even ambient music producers. The presets are so many that you can get the impression that they are endless...

Delay and reverb effects are average but the distortion is excellent (big German sound!!)

In spite of all these qualities, it is still possible to criticize the Blofeld. (see the high amount of posts on the forum)

First of all, the unit keeps on having lots of bugs even after the 4th upgrade. (which, by the way, can take a long time to solve and become a real headache before installation)
The theory according to which "distorted and crackling sounds are normal" may have to be reviewed because presets do sound much better after updating the unit. Some presets are designed to sound distorted or with crackles but you'll notice immediately the difference between them and a preset that's being distorted because the unit is not working properly.
The synth sometimes freezes during playback and all your editing gets lost!
(it is really bothersome to have to always look for updates in order to get the unit to work properly)

Concerning the use of the unit, I was really surprised to learn that it's not possible to use only 3 or 4 parts in multimode, it's either 16 or one. As a result, if you have a system with several instruments (as in my case), you'll have to use the synth's USB MIDI interface to increase the Midi Outs and use all your gear. But if you want to play live without a PC (like me), it will be exasperating because you'll need 2 Midi Outs on your sequencer. I actually wrote to Waldorf about this and their answer was that the unit was not conceived for such applications! Great!

To wrap it up, I'll say the unit is good for studio use or as a complement in live situations if you already have a sequencer. Its performance problems don't really undermine its enormous potential, they only are irritating.

I'm really happy with this synth, I really like its warm and powerful sound. This unit fits perfectly in any synth rig thanks to its plentiful presets and its compact size... and it looks really nice!!!
Did you find this review helpful?yesno
Cookies help us improve performance, enhance user experience and deliver our services. By using our services, you agree to our use of cookies. Find out more.