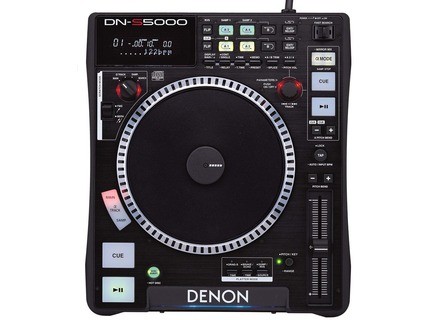 View other reviews for this product:
I have a pair for 3 weeks. I'm not very DENON the basis for it is not tjrs bcp function useful in very little space (search and questionable ergonomics).
But here they have really improved, it's good.

What I like about these turntables c well on the turntable, the few effects, and intelligence of certain commands. The belt bit frightening but there is a spare in the box and it cost - $ 10 so it's not worth whining. Otherwise HotStart 4 / 2 samplers / 2 tracks at once / pass-pass / echo / brake / drag-s / slice (Loop unread) / scratch (track 1 / 2 / sampler / cdj mode).

What I like least c the depth of the screen, if you are not well overhanging the last line escapes you (I'm 1m94 yet ...), the HotStart loops and is too close for my taste (nan j 't have big fingers ...).

On the day of purchase, I compared with the cdj 800 / cdj 1000 / Numark Axis 8. An afternoon test (THANKS STAR MUSIC), my ranking was as follows:
- DN-S5000 (bcp features for the price / updated by cdr / alpha track: two tracks at once).
- CDJ 800: price, a return to cue the tray is released qd
- CDJ 1000: the reference, but the relative inertia of Palteau bothered me in scratch
- Numark: I never liked Fisher Price even when I was little.

As I had the means, I allowed myself to buy it but it would have taken the CDJ 800. The price / features / quality is excellent, because for just a quality inferior to Pioneer, it was more bcp innovations, the ability to update software (by the way she reads the MP3 but only with the pitch as a function ...).

A remake? yes because of the good stuff c / not for one day or another will have more competition. The CDJ 1000 MK2 does not have as much and will be announced at about the same price ...

Finally, I would end by saying that before I was 100% Pioneer (ergonomics and quality in my opinion) and although 15 days moaned against Denon, I must say that I appreciate them now, despite the harshness of some control (pitch bend : typical DENON).
See the source
Did you find this review helpful?yesno
Cookies help us improve performance, enhance user experience and deliver our services. By using our services, you agree to our use of cookies. Find out more.