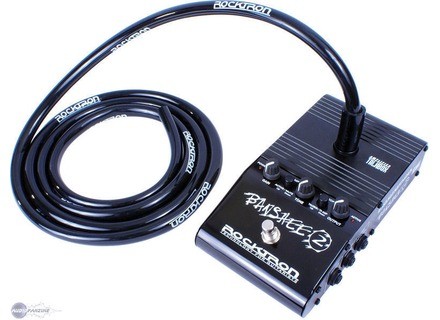 Buy this productView price information >
View other reviews for this product:
If you read this opinion is that you may be interested in buying a talk box.

First of all, what&#39;s a talk box: simply put it is an effect that allows you to "talk" your guitar.

How does it work? Quite simply, in fact: the "sound" (amplified electrical signal) of your guitar is sent to a speaker contained in an enclosed, the "sound" (sound pressure) out of the HP can then "escape" of the enclosure by an opening connected to a tube. You place the tube in your mouth, or nearby. This then serves as a sounding board: one can simulate a band-pass effect, such as a wah, or to "speak" the guitar, what are ultimately our mouths and throats when we are talking (sound vibrations emitted by the vocal cords at the glottis resonant in the oral cavity and pharynx, but hey we will not do a course in physiology ...)! This "sound" modified by the resonance is then recovered by a vocal mic, plugged into a mixer, an amplifier, a stereo, in short, what you want ...

Simply
- The Dunlop connects between the receiver and the HP is actually a HP in a closed chamber. She is able to withstand 100 watts input, finally, in theory ...
- Rocktron plugs into the chain of effects, such as a pedal is a HP + enclosure, but equipped in addition to a built-in 5 watt amp
- The plugs as a Danelectro pedal with integrated amplifier and microphone built his recovery!

For Rocktron, the pedal is very solid, very seriously designed and high quality workmanship. No complaints, very pro pedal.
Side connections and possibilities, it is very complete: guitar input, output amp or HP external input / output effects loop, 3 controls Gain, Tone and Output level, two switch when using the loop and the bypass of the amp when the effect is activated. The Banshee is a simple no effects loop.

In short use is quite laborious and it takes a lot of additional hardware, the difficulty is mainly to "recover" the sound of the Talk Box: sono additional other amp, console, ... not to mention fixing the tube to the mic stand!

Use of hand because the grip (well ... in the mouth) is quite fast and have fun. The mastery of the effect will take a bit more training anyway ...
The output level increases the pressure from the tube (logic). Unless you push the volume up, no sensation of pain or unpleasant, it&#39;s even more fun.
In this regard the Dunlop connected output amplifier, can quickly toothache with a strong pressure to cash! In addition, the HP still supports integrated high power hard and distorts the sound. In short, if Kerry King used it, it would have no teeth!

Then I put 2 / 10 because it is still very complicated to install and use!

Once plugged in cons, we do not regret the effort.
The sound is fantastic and easily scalable: a Wah-Wah very effective, clear and easy to modulate, the Wah discreet to the most dramatic.
Talk Box Effect: the guitar speaks simply.

Additional opportunities are very useful: the gain, tone, effects loop, using the talk box and the signal "dry" to the receiver simultaneously, ...
This Rocktron Banshee 2 is the most comprehensive and most interesting ... by far.

The Dunlop and a Banshee will allow you to use the sound signal Talk Box or "dry", but not both simultaneously. The result is less subtle and offers fewer opportunities. Dunlop The receives the signal fully enriched by the effects and amp downstream. The banshee still allows a bypass of the amp main and side effects: more versatile to use.

I do not know the Dunlop Danelectro. According to the notice posted, the Dunlop is very successful but the Danelectro pretty grim. Try ...

In total I put still 9 / 10.
Installation is labor intensive and use a little complicated, but what a result!
The possibilities are numerous with the Banshee and very interesting effects loop, use talk box + dry signal simultaneously, gain control and tone ...

The Danelectro is certainly much simpler to use, but the result is bad. Too bad ...
The Dunlop plugs amp output: beware of teeth!
The Banshee is a much less complete than the second version and does not include using the dry signal and the talk box simultaneously.

If you are tempted, make an effort (okay a big effort) and adopt the Banshee 2 well worth its price anyway and that is really dessu lot.
See the source
Did you find this review helpful?yesno
Cookies help us improve performance, enhance user experience and deliver our services. By using our services, you agree to our use of cookies. Find out more.