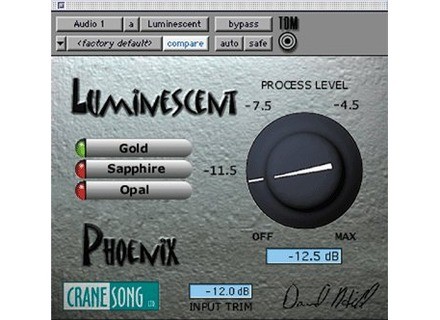 Crane Song's Phoenix Luminescent is one of five that makes up the Phoenix bundle of analog treatment plug-ins. These plug-ins aim to recreate digitally a tape saturation sound to help digital tracks sound warmer and more realistic. Each of the five plug-ins in the bundle including Luminescent serve the same purpose, but each has a different take on it and provides users with different colors to use for different situations. They all do share the same interface, with a make up consisting of three modes to choose from - opal, sapphire, and gold, as well as a knob for setting the amount saturation desired. Once you understand the format, you'll be able to use each of the plug-ins independently and easily since they're all the same. I really like this simple make up as it makes it as easy and as possible to get the most from the plug-in. A manual shouldn't be necessary here...

I'm currently running the Crane Song Phoenix Luminescent plug-in (as well as the other Phoenix plug-ins) on my home studio's system. Included in this set up is a Mac Book Pro laptop computer with a 2.2 Ghz Intel Core 2 Duo processor and 4 GB of RAM, which I'm using to run Pro Tools 9. I use the plug-in only in Pro Tools since that is my main DAW for mixing. I've never had any problems at all with the performance of it since I only use a few instances of it at a time anyway.

Crane Song's Phoenix Luminescent plug-in is the cleanest of the bunch in the Phoenix bundle of analog treatment plug-ins. I don't use it as often as I do some of the others like the Dark Essence plug-in, but it still comes in handy a lot if I'm looking to warm up a sound without adding too much coloration. I like this one for mixing individual tracks because of this, while I mostly will use Dark Essence on a master buss. I think the Phoenix bundle in general is one that every DAW owner who is working mostly inside the box should have. There are a lot of analog treatment plug-ins out there, but most of them don't sound nearly close to the real thing, and while this doesn't necessarily sound exactly like you ran it through a tape machine, it's the closest you're going to come in the world of plug-ins. Definitely worthwhile for everyone with a DAW to have...
Did you find this review helpful?yesno
Cookies help us improve performance, enhance user experience and deliver our services. By using our services, you agree to our use of cookies. Find out more.