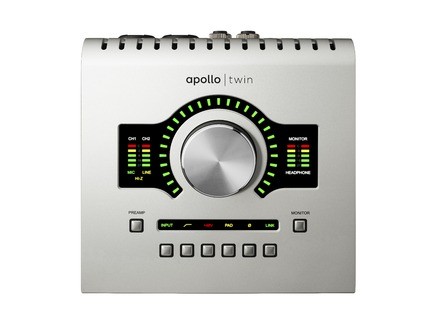 The Apollo Twin Solo and Duo are desktop 2x6 audio interfaces that connect to your Mac OS X 10.8 or 10.9 via Thunderbolt only. The devices feature 24-bit / 192kHz converters, two mic/line preamps, a front Hi-Z instrument input, two line outputs and two front headphone outputs. Two digitally-controlled analog monitoring outputs are also included and you can get up to 8 additional digital channels via the optical connection.

This Unison technology, that debuts today with these two new Universal Audio Apollo Twin interfaces, allows for emulating iconic vintage preamps with the interface hardware mic preamps. This analog/digital system is the result of three year’s research, and allows for real time continuous  bidirectional control between hardware and the UAD preamp models, by adjusting the impedance, sweet spots in the gain stages and the behavior of the mic preamps circuits of the Apollo prior to A/D conversion.

The brand adds that the Unison system will be available for the first generations of Apollo audio interfaces in Q1, 2014.

Full details about the Apollo Twin will be available later today at www.uaudio.com/twin.