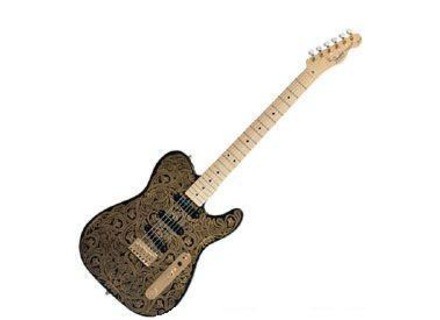 Buy this productView price information >
James Burton is known as the master of the Telecaster. He has been active for over 50 years and most of those years he has played Telecasters. He has played with everyone from Elvis to John Denver. Fender has made Burton Telecasters in two batches but have used the same batch of necks on them. You might get a Burton tele from the 2006 but it may have a neck with a 94 serial number. These guitars are made out of basswood. They have a maple neck and fretboard with 21 vintage sized frets. The guitar comes with 3 lace sensor pickups tuned to Burtons specs. The pickups are switched with a 5 way switch. In the back position is just the bridge pickup. In the next position forward is the bridge and the middle pickup. In the middle position is the neck and the bridge for the classic tele sound. In the next position is the neck and the middle and finally in the forward position is just the neck pickup. Fender calls this Strat-o-Tele switching. If they feel the need to trademark moving two wires around more power to them. It has the Fender S1 push pull knob so you can get some humbucker sounds. It has all gold hardware. It has a strat style string though hard tail bridge and pearl tuning buttons.

Fender does some things on its high end models to make them play better. The guitars have rounded fretboards and on the neck join. The 4 bolt block is slightly rounded off on the bottom forward corner so you can more easily reach the higher frets on the neck. The guitar has vintage frets and a 9.5 radius fretboard so it has more of a vintage feel and action. I like the Stratocaster style bridge on this guitar. Im not a big fan of the ashtray bridges on normal Telecasters. This guitar shows that you can get a good Telesound without the huge uncomfortable bridge.

These guitars sound very nice and are very versatile. The basswood body helps improve the brightness of the sound you would expect from a Telecaster. The maple neck also helps to give you the classic Stratocaster and Telecaster sounds. With the 3 pickups and the modified 5 way switch you can get all the Stratocaster sounds and all the Telecaster sounds. This guitar is pretty much built for country twang. The sound is nice and bright and all your hybrid picking licks can come though very clearly. The S1 switch can get you big smooth humbucker sounds. If you want to play with more gain this position is where you should go. The fatter humbucker sound wont cut your head off when you switch on the gain like the single coil sound will. The Lace Sensor pickups are great. Lace Sensors use weaker magnets but are heavily sheilded so they do not produce the noise a single coil pickup would normally make. Since the magnets are weaker there is less drag on the strings. Drag on the strings can pull your strings out of tune and lessen the sustain of your notes.

The model I had was finished in Pearl White. I think this is the classiest finish they come in. The rest of the guitars come in like paisley flames and stuff. I think all those guitars look like rugs you would see at some old ladies house. I dont mind paisley finishes but paisley flames is just not me. They made a few with normal paisley finishes which are alright. It seems that they have discontinued the pearl white model which is too bad. If you are looking for a hot high end Tele that can do Strat and humbucker sounds this is one of the few that can do it all from the factory.
Did you find this review helpful?yesno
Cookies help us improve performance, enhance user experience and deliver our services. By using our services, you agree to our use of cookies. Find out more.