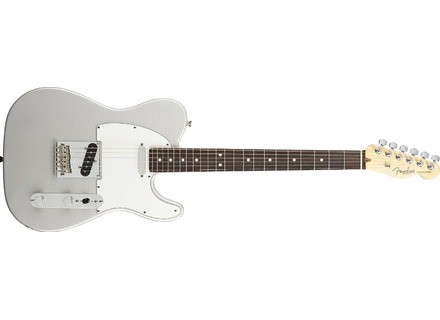 View other reviews for this product:
The Fender American Standard Telecaster is an exemplary guitar. Features include an alder body, maple neck and fingerboard, and proprietary Fender tuners. Onboard electronics consist of a pair of the American Tele single coils routed through a three way switch and shared volume and "delta" tone controls. The blizzard pearl finish is striking, definitely one of my favorite color options that Fender has available.

The Standard Telecaster's "modern C" neck profile is a happy medium between thick and slim. It is easy enough to move around the guitar but don't expect lightning fast playability. Tuning stability was so-so. I think the Standard could use an upgrade in the tuner department. I enjoyed the hand rolled fingerboard immensely. The comfort level between this and a lower priced telecaster are night and day.

I played the Standard Tele through a Bogner Alchemist Combo. No pedals.

The guitar has a bright percussive attack that is very signature to the Telecaster. Even with gain applied, the guitar maintained a chime and clarity that you simply can't attain with humbucker equipped guitars. The alchemist was set up for a variety of sounds from plucked blues to softer contemporary rock up to higher gain territories. The Telecaster handled all of them exceptionally. I used to shun single coil guitars (especially Telecasters) for the longest time, but my experience with this has changed all of that. I feel fully confident in using a Tele shape guitar in more aggressive styles.

The Fender American Standard Telecaster would be a good introduction to the line if you are unfamiliar with Fenders. The feel and tone of the guitar is greatly superior to the lower cost models offered by Fender, accurately representing the craftsmanship that fans of the brand have grown to love. The American Standard fetches $829 new. There are many of these circulating in the used market.
Did you find this review helpful?yesno
Cookies help us improve performance, enhance user experience and deliver our services. By using our services, you agree to our use of cookies. Find out more.