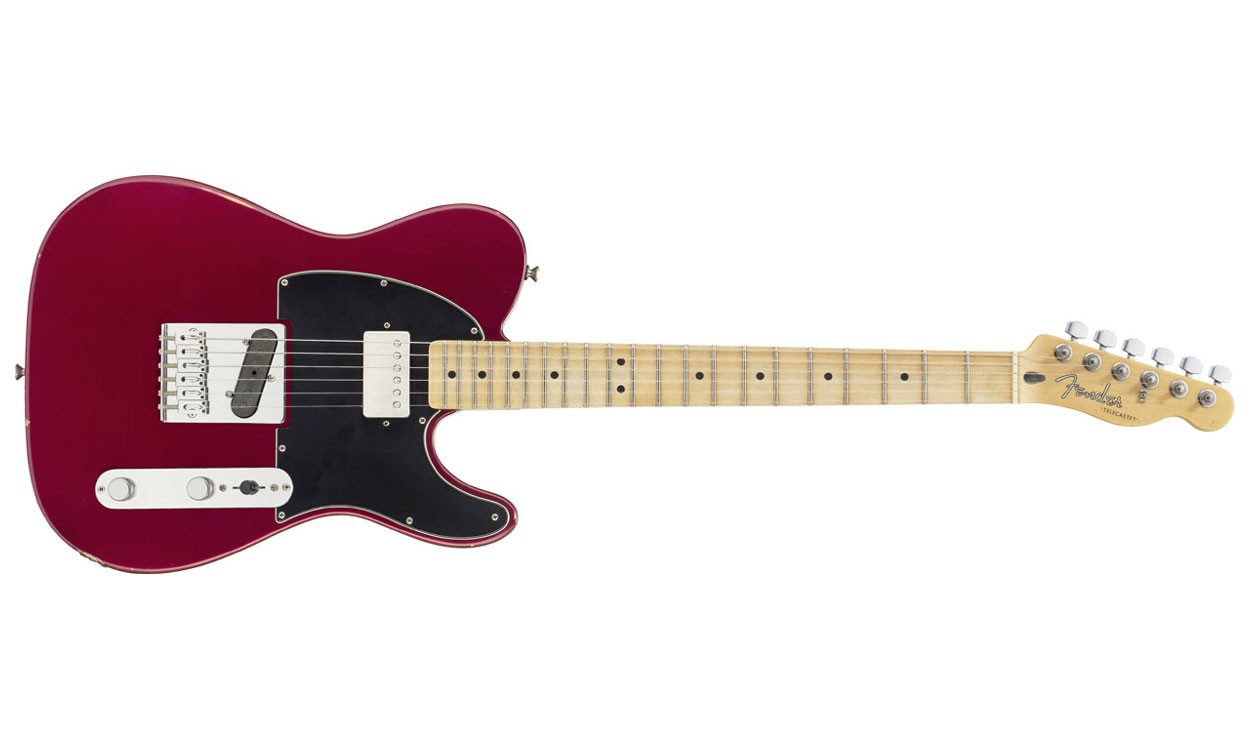 Without any offense to purists who get a nervous breakdown every time they discover the slightest scratch on their guitar, the Road Worn Series instruments have been intentionally damaged: the varnish has been scratched and flaked off, the neck has been worn down by an artificial process instead of by natural aging — all in order to give them a retro look!

Fender already offered similar aged products, handcrafted by skilled luthiers in the famous and very select Fender Custom Shop. However, those instruments have a value for money ratio that make them prohibitive for most guitar players. Due to the increasing success of relic instruments by small manufacturers in a lower price segment than its Custom Shop instruments, Fender decided to go for a new marketing strategy and developed the Road Worn Series (made in Mexico), which is much more affordable. The first generation of the series created in 2009 included two different Stratocasters (a 50's model with maple neck and fretboard and a 60's model with rosewood fretboard), one 50's Telecaster and two bass guitars (a 50's Precision Bass and a 60's Jazz Bass). The second generation of the series expands the product range with, for example, the Road Worn Player Telecaster we want to test today.

She's Got the Look !

Unlike the 50's Telecaster of the former generation, this new product doesn't use two single-coil pickups but a single-coil on bridge position and a humbucker on the neck. We'll come back later to the specs of each pickup. The guitar is provided with a 10-46 string set. Note that the strings pass through the body. The body is made out of alder with a black matte nitrocellulose finish. The eight-hole black pickguard is made out of three plies (black/white/black). And the neck is made out of massive maple. Like all Telecasters, it uses a bolt-on neck tightened with four screws. A fully standard Telecaster up to now. The neck has a modern profile with C shape. The neck feels very easy to play because of its thinness. The width at the nut (synthetic bone) is 1.65" (42 mm), while the scale length is 25.5" (648 mm). The fretboard is not embedded, but it has been slightly aged so that you can feel the wood fiber here and there with your fingers. The fretboard feels very smooth, delicate — not to say sensual. The frets are medium-jumbo size. The fretboard comes with black-dot inlays. Truss rod adjustment has to be done on the headstock with a 3/16" (0.48 cm) Allen key. The chrome hardware, including the bridge with six individually adjustable saddles, is American Standard type; it has been slightly aged and has a nice-looking worn-out look, without any exaggerated oxidation marks. Conversely, the tuning machines have not been aged...

On the metal plate you have two controls (volume + tone) and a three-way toggle switch. The first switch position is exclusively for the bridge pickup, the second one for both pickups together and the third one only for the neck pickup. Compared with a standard Telecaster, the control plate of the Road Worn has been inverted. This gives a more direct access to the volume control which is closer to the player's right hand. However interesting and practical this idea may be, it doesn't yield the best visual effect.

The pickups are a Tele® Tex-Mex single-coil (bridge position) and a Seymour Duncan® '59 SH1N humbucker (neck position). The bridge pickup is "overwound," which means more turns have been made around the magnet in order to have a more powerful tone. This renders good results with regard to the output level, but the the sound character is rather sharp and aggressive in clean mode. You'll have to adjust the timbre with the tone control in order to counterbalance the overemphasized highs. The sound becomes much more interesting as soon as you add a slight crunch, in which case the character becomes fatter, more powerful and thicker.

The second position is the most interesting, regardless of whether your sound is clean, overdriven or distorted. The combination of the humbucker and the bridge overwound pickup works really good: sound turns fleshy and thick.

The neck pickup alone provides a jazzy fat tone that is perfect for clean or distortion solo parts. The clean sound with a deep reverb is especially appealing but watch out, you can make your neighbors very angry!

A Mark in Enamel

We have to mention that the guitar we received had problems staying in tune and that its intonation was imprecise. This is surely due to the fact that the strings on the guitar were not the original strings (10-46 instead of the original 09-42 string set) and that the previous user forgot to adjust the instrument (or maybe the guitar simply got unadjusted during transportation). So, we had to grab our screwdriver. We also noticed some resonances at the nut that caused problems during the recordings. Most probably these problems were specific to our test guitar (we hope so!) but we still had to mention them.

Don't Judge a Book by its Cover

The body aging looks quite authentic. Scratches and marks in the lacquer have been carefully made in strategic places (connector, pick scratches on the pickguard, belt buckle marks on the rear side, etc.). However, it's a pity that the aging process was always done in the same places on all instruments, especially on the rear side of the body, because the effect looses authenticity. This had also been mentioned for the previous Road Worn generation. Unfortunately, it seems Fender didn't spend too much time or effort "customizing" these instruments. The same applies to the neck, which even though it provides perfect playing comfort, great playability and a very soft feel, it has been a bit "overaged": the transition is not smooth enough between varnished and polished places, like on real old, used instruments.

In spite of its vintage look and feel, this instrument sounds like a new guitar. It's no surprise considering that all electronic components and cables are new and the pickups have a modern design. Instruments age over several decades of playing, but also, and especially, due to the unwanted demagnetization of their pickups, which provides a unique sound personality — not the case of this guitar. We'll have to catch up in 40 years to see if this guitar also aged well.

Nevertheless, this instrument provides you with an ideal playing comfort. Moreover, you won't be afraid of scratching the lacquer of your brand new guitar in the first rehearsal. If you are still not convinced of buying an artificially aged guitar, give this one a chance: it is really worth it!