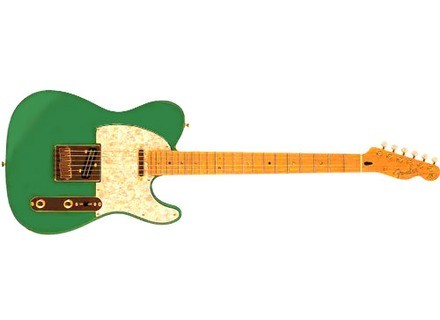 View other reviews for this product:
This guitar is made only by fender japan.

handle a button mapple has 22 super jumbo frets, it has a radius of 305 minutes and is quite thick, not to say that c is half a baseball bat!

the pickups are DiMarzio, a "the chopper" position, which is acute in double-single format, and a twang king in the neck position which is a real simple format telecaster.

the bridge is a fixed bridge telecaster modern type.

there on this guitar a 3 position selector, one volume, but no tonalitee.

button vested in the tonalitee on other guitars, acts here as a phase switch in position two of the selector.
So we are left with four sounds instead of 3 on a telecaster standart.

To speak of the handle I would say that it is a bit confusing at first to be that we play on an ibanez guitar style!

The handle is very thick and very well filled by hand.
c is the opposite of all ibanez handles very very end.
against by the key is fairly flat, which is very very nice to dislocate.

each access to acute n is neither easier nor more difficult thing than other telecaster.

The body is ash, so n is not super light, but that s not the mahogany either, so c is a good compromise.

the sound of this guitar has nothing to do with the sound of a "real" telecaster, for it is a telecaster boosted, which can afford to tackle problem without all styles of music.

c is done, I also wanted a guitar with a fixed bridge, because I love him too n the vibrato.

this guitar was crystal clear sounds at will, but ausii muffled sounds in jazz.
may have a well gras, but also very very sharp and precise thanks to the double format simple bridge.
Crunch sounds are the strong point of this guitar (if have can find a weak point !!!).
and games with the volume is a pure delight.

THERE is absolutely nothing detestable on this beautiful guitar.

I used the last 4 months, and I apreciated the more, every day passing by.

Special features of, or Particularities that I like best! the guitar itself, which for me is "THE" ultimate guitar.
side face c is a telecaster, and c cell dimension is a gibson SG to summarize the situation.

j've tried a LOT of models of the advan-t aquérir, and I've even bought a guitar that I have sold away and ordered another guitar with him at the last moment j cancels the order for this REPLACED BY!

I think this guitar is no longer available outside of Japan, so I'll keep mine for life, and I already think I am even make it to one another by a luthier or the day will be tired.

If I had to make the same choice? without any hesitation.

I recommend this instrument to all those who want a guitar that can abiorder all styles, I have bin told all.
the handle is big, but after c is impossible to board on a stick type ibanez jem.
See the source
Did you find this review helpful?yesno
Cookies help us improve performance, enhance user experience and deliver our services. By using our services, you agree to our use of cookies. Find out more.