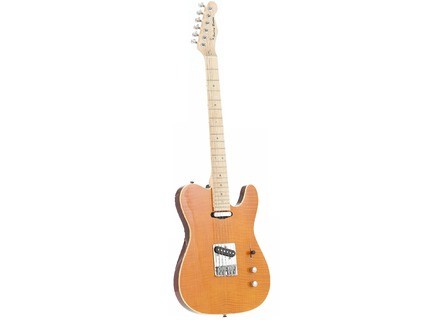 Value For Money : Excellent
View other reviews for this product:
Telecaster "custom" made in Korea for the German wholesaler and sold Thomann (formerly) a fire sale price. Mahogany body (of mine in one piece!) Topped with a veneer of curly maple, Bolt-on maple 22 frets. Mechanical unbranded oil bath fittings and "TV" usual, with two traditional single coils. No complaints about the production, nothing is wrong, well put frets, nickel sleeve, varnish etc ... worthy of much more expensive instruments.
Small "flat", the guitar comes unresolved (but with the Allen key that go well) so a little session before playing mechanics to adjust the action, intonation and height of the microphones. Considering the price and sold by a wholesaler, not surprising that. A little annoying thing: because of mounting the rear of the microphone selector plastic tip plays fast girls playing air. Two solutions: one drop of "Cyanolit" (do not give a damn everywhere!) Or replace the button by one of Strato, thinner at the base. I found one to match the "binding" for € 1 ... Class!

The handle is a bit wider and flatter than on the real TV (Fender) and most of their clones. Very playable and can be acrobatics "metallic", but the pickups are not made for that, or picking a game (blues or country) much more comfortable than most electric. The access to the latest boxes: medium, like the original! But when you get there without risking a sprained ...
Balance both sitting and standing with a strap. A bit heavy, probably because of the mahogany body? The settings are as original, simple and very accessible play. The bare minimum, but well thought out.
For a guitar equipped with single coils it does not snore, the electronics are carefully shielded cable. The original pickups are far from being ridiculous, unless you push too much saturation.

The "TV" has a unique sound characteristic and recognizable. It is almost clear in his "sound", if one insists slamming very slightly. By its very rough it quickly becomes saturated (although Roy Buchanan played sometimes with distortion "hendrixienne"). The better "between the two" and then it responds to 1 / 4 turn to attack any difference or adjustment knobs. This is for me the charm of this gear, with stripped and timeless design! The first "TV" came out in 1949 .... At the time there were only blues, jazz or country to use it, so it is not a suitable instrument to rock too "heavy". Against her by a blues-rock crunch of that light to ride saturated with a simple flick of the wrist or knob, or picking "Chet Atkinesque" in the clear: there's no picture! Not to mention the solos to Gilmour: with lots of reverb and delay .... we believe it
This one is very much in mind, but with a bit of difference because of the mahogany body (not ash): the sound is a little more "round" and sustain a little longer. This is far to be a failure! In short, if one accepts the basic principle of sound "TV", this one is quite the road and even a little better than that.

I have over 2 years: RAS reliability issue.
Value for money: to find better, he should have to go a long way ... But this model is no longer manufactured, shame those who are tempted.
I wanted a "TV" but without the handle "pickaxe" Fender and affordable. I tried including a Blade "Delta" and a Yamaha "Mike Stern" I almost get a kit ... without really believing I bought it for the look and size of the handle, telling me that for the price it is not binding to try. And I passed ... and I'm not about to sell it!
Good basis for customization: violin of good quality and cheap, the guitar at the cost of a full sleeve!
10 for value for money!

EDIT 2011: "Custom" from a cover plate with "house", a pair of good mics and a 4-position switch Fender Tele ... It's even better for a very modest cost.
The bridge allows bad enough to go up against the ropes or in the usual way through the body ("string through") or back ("top load") Squier as some Japanese and most other guitars. Try it, the tone changes a little but it's still audible, and the mod is free and reversible.
See the source
Did you find this review helpful?yesno
Cookies help us improve performance, enhance user experience and deliver our services. By using our services, you agree to our use of cookies. Find out more.