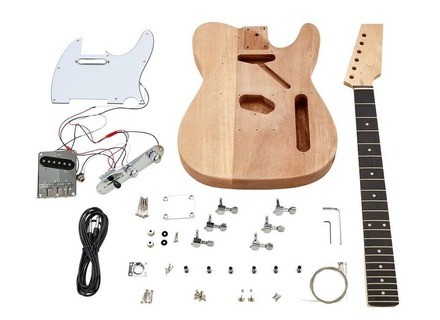 View other reviews for this product:
from: Thomann, origin, probably China
3 vintage bridge saddles, I bought a separate, six adjustable saddles, ropes traversing.
I also bought a kit for remote microphones hot Wilkinson, the bushings, I was hesitant to change the mechanical direct by fender, I will see
the rest: basswood body in two parts, well shaped, neat knockouts, round nickel frets fully inserted, although filed, nothing to say.
the electronic part: when I set all (though it is pre-wired) nothing worked, no sound at all. as the user guide is in German ...
so I found on the net connections of a standard TV, I just soldered to the plate that I had and I just rewired and it works!
The potentiometers are still "on / off"

thick neck, but that suits me (I have a Gibson SG, I'm not out of place)
once settled the action, harmonics, guitar sounds like a TV, it slams, it's clear, sharp, well there are characteristic twang is what I wanted. ergonomics: it's a TV, it's heavy (compared to my SG)
the sound is very accurate.

the sounds range from crystal to overdrive, after distortion is not great.
I currently play with a Fender G in December, I prefer the sounds clean and it does

the advice I give is that it's a nice kit to have fun, well done, but I think we should turn all the hardware (mechanical potentiometers, strings, bridge ...) and all replaced by the adaptation of best quality.
with that for 150 euros, I have a good TV that is well worth a squier. and it was I who did it (4 coats of green lagoon, six coats of varnish), some stickers. look fabulous, my son wants the same!
See the source
Did you find this review helpful?yesno
Cookies help us improve performance, enhance user experience and deliver our services. By using our services, you agree to our use of cookies. Find out more.